A Discussion with Sister Leticia Gutiérrez, Missionary at the Scalabrinian Mission for Migrants and Refugees, Mexico City, Mexico

Background: As part of the Education and Social Justice Fellowship, in June 2016 student Carolyn Vilter interviewed Sister Leticia Gutierrez, a missionary at the Scalabrinian Mission for Migrants and Refugees (SMR) in Mexico City, Mexico. In this interview, Gutierrez expands on the work of the Scalabrinian Mission, highlighting the role of faith and the church in providing comprehensive services to migrants fleeing violence.
What is your name, and what do you do?

My name is Leticia Gutiérrez, I’m a Scalabrinian missionary, and you’re in our SMR offices: the Scalabrinian Mission for Migrants and Refugees. We accompany three populations within the world of migration: those who have been victims of serious crime like torture, kidnapping, and imprisonment; solicitors of asylum, who we accompany in a smaller proportion but also help; and defenders of migrants’ human rights, who’ve been threatened, displaced, and even killed. So we provide a complete, interdisciplinary, inter-institutional accompaniment to these three populations, including public policy work at the local and federal levels.

When and how was the organization founded?

The Scalabrinian family, both male and female, was born at the end of the nineteenth century specifically to aid the migrant population; at that point, to aid Italian migrants leaving for the Americas. This is our work. This specific mission, SMR, began providing for this population of migrants in February of 2013, after 20 years of work on the part of the Mexican Episcopal Conference serving migrants. This year, I will complete 21 years as a Scalabrinian sister. After finishing my studies in international commerce, I worked for three years, and then I entered the Scalabrinians.

What inspired you to do this type of work with migrants?

When I entered with the Scalabrinian sisters in 1995, not too long ago, I didn’t clearly understand that I was a migrant. It wasn’t a topic that was very well known or explored, the way it is today. I have four siblings who migrated to the United States undocumented; of the four, only one has stayed there, and he’s now regularized and has a family and everything. But this experience of migration was so common among families that it wasn’t a topic that was discussed: it was simply lived, and that’s it.

So when I got to know the Scalabrinian sisters and they invited me to come and do a monthlong mission in Tijuana, and I arrived there with three other young people, suddenly encountering all of the networks you find in Tijuana—from the woman who sells religious icons and knows who the coyotes are and which hotel you should stay in, who’s involved in trafficking and will end up taking you to the red-light district—discovering this whole network that exists in the area of human trafficking impacted me, because it made me think of my siblings who had migrated. It hadn’t occurred to me to ask them, “How did it go for you? What happened to you? How did you do it?” This first contact with migration issues, for me, was very impactful. Later, we walked through the areas migrants would pass through, and in the Casa de Migrante itself, hearing the testimonies, seeing all the injuries, wounded legs, people abandoned with injuries—encountering this reality is what made me stay there.

What did you do after this experience? Did you immediately begin working in the issue?

No, as it was a mission trip, I returned to the rest of my vocational process as a sister. I spent the entirety of August there, and then returned and, having decided to continue as a sister, spent September closing everything I had opened, commitments or anything at home. On October 15, 1995, I entered the congregation.

Did you return to work in Tijuana?

After I joined the sisters, I lived in Guadalajara for my first year of formation, and then I returned to Tijuana and was there, focused overall in our Casa de Migrante for women but also going to the one for men, doing work with catechesis or discussing human rights—formative work for the migrants.

What do you do here at the SMR, and how many people work here?

We work with the specific population I discussed earlier: migrants who have been victims of serious crimes. This means that the migrants who arrive here have suffered some crime and arrive hurt, still suffering some physical injury or psychological violence, perhaps due to torture.

The first thing we do here is ensure that the person has lodging and is able to step away from the violence they’ve been fleeing. After two or three days of being able to rest and relax, an interview is conducted. We have 16 or 17 people in the organization, including professionals, so the social worker is the first contact with the migrant. They detect the issues the person has, physical, psychological, as the case may be, and they direct the migrant to the general practitioner we have here and to the psychologist. The psychologist also does an interview, in order to see if there are psychological conditions that need attention, and all of the necessary psychological accompaniment is available while they’re here with us. There’s also the legal area—we have lawyers here—and the lawyers also do the work of accompanying any complaint or report that the migrant might file, along with the application for a humanitarian visa or recognition as a refugee.

The migrant will stay with us for an average of two or three months, more or less. This is a middle-term- or long-term-stay shelter, depending on the physical and psychological situation of the migrant. Throughout this time, a complete psycho-emotional, community approach is taken, so that the migrant individual can discover all the potential he or she carries and can return to the journey they left home for in the first place.

Do the crimes in question usually happen in the migrants’ country of origin or in their journey after leaving home?

In both locations. When migrants have been victims in their place of origin, this leads us to seek out recognition of refugee status. In the case that they’ve been made victims here as well as there, and don’t bring proof or sufficient proof of the crimes that they suffered in their country of origin but have more available evidence of their experience in Mexico, then we’ll seek out recognition of their status as victims of that more recent crime: the visa for humanitarian reasons. It’s a visa, in the case of victims of serious crimes, when they’ve filed a report; the visa for humanitarian reasons lasts a year, with the possibility of renewal while the investigation is in process. But that doesn’t mean that the victims we accompany have only been victims of crime here in Mexico. Some of them have been victims there, and here.

How difficult is it for individuals to get these visas?

Every person and case is different, but this is a right that they have by law. The role that the lawyer here plays is important above all, because the work of filing the report that the lawyer undergoes with the migrant is the antecedent for gaining recognition and visa status. Here, the Attorney General of Mexico (Procuraduría General de la República) plays a very important role: they’re the one that officially declares that the person is a victim. So the role that the lawyer plays—the justice the lawyer helps create—is very important. If there isn’t a good declaration, developed, well-structured, it will be that much more complicated for the migrant to be recognized. And this organization functions practically 100 percent on charity. Whether from donations from people who are in solidarity and donate 100 pesos, 1,000, or from financial backers, above all from the Catholic Church abroad. 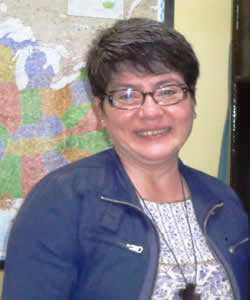