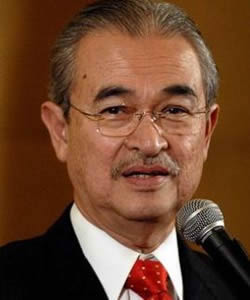 Abdullah Ahmad Badawi is a Malaysian politician who served as prime minister of Malaysia from 2003 to 2009. He was president of the United Malays National Organization and led the governing Barisan National parliamentary coalition. Abdullah succeeded Mahathir Mohamad in 2003, rising from the position of deputy prime minister. As premier, he emphasized anti-corruption policies and focused his economic policies on sustaining previous economic gains rather than continued growth. He strengthened Malaysia’s agricultural sector and promoted moderate Islam. Prior to being deputy prime minister, Badawi held the positions of minister in the prime minister's department, minister of education, minister of defense, and minister of foreign affairs. Badawi stepped down in favor of Najib Tun Razak in April 2009.