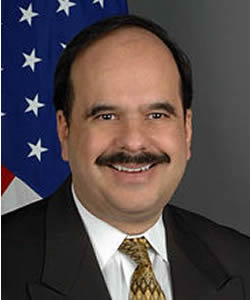 Alberto M. Fernandez is vice-president of the Middle East Media Research Institute and a member of the board of directors of George Washington University's Center for Cyber and Homeland Security. He served as the U.S. State Department’s coordinator for the Center for Strategic Counterterrorism Communications from 2012 to 2015, retiring from the State Department in May 2015. Fernandez has served as U.S. ambassador to the Republic of Equatorial Guinea; charge d’affaires to the Republic of Sudan; director for Near East public diplomacy; director for Iraq public diplomacy; and in senior public diplomacy positions at the U.S. embassies in Afghanistan, Jordan, Syria, and Guatemala. His awards include the 2008 Presidential Meritorious Service Award, 2006 Edward R. Murrow Award for Excellence in Public Diplomacy, and a 2003 Superior Honor Award for his work in Afghanistan. Fernandez has published in ReVista: the Harvard Review of Latin America, Middle East Quarterly, and the Journal of the Assyrian Academic Society.