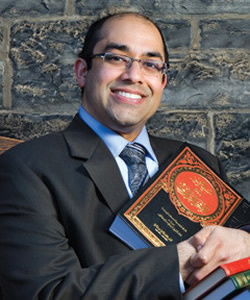 Anver Emon is a professor at the University of Toronto Faculty of Law and the Canada Research Chair in Religion, Pluralism and the Rule of Law. His research focuses on premodern and modern Islamic legal history and theory, premodern modes of governance and adjudication, and the role of sharia both inside and outside the Muslim world. Along with numerous articles, Emon is the author of Islamic Natural Law Theories (2010) and Religious Pluralism and Islamic Law: Dhimmis and Others in the Empire of Law (2012), as well as co-editor of Islamic Law and International Human Rights Law: Searching for Common Ground? (2012). He is founding editor of Middle East Law and Governance: An Interdisciplinary Journal and a series editor of the Oxford Islamic Legal Studies Series. Emon holds five advanced degrees, including a J.D. and Ph.D. from the University of California, Los Angeles, M.A. from the University of Texas, Austin, and LL.M. and J.S.D. from Yale Law School.