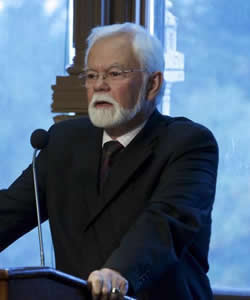 Peace or Justice in Africa: Does the ICC Help or Hinder?

Charles Villa-Vicencio is a distinguished theologian and leading global authority in matters related to transitional justice and reconciliation. His contributions extend beyond academics: from 1996 to 1998, he played a central role in South Africa's Truth and Reconciliation Commission, where he acted as national research director. Villa-Vicencio has used his insight and expertise to advise numerous countries dealing with the challenges of rebuilding their societies after periods of internal strife, including Peru and various African nations. Villa-Vicencio is the author of several books, including A Theology of Reconstruction: Nation-Building and Human Rights (1992) and Civil Disobedience and Beyond: Law, Resistance, and Religion in South Africa (1990). In addition, he has edited or co-edited various volumes, such as Africa Renaissance and Afro-Arab Spring: A Season of Rebirth (2015, with Erik Doxtader and Ebrahim Moosa), and The Provocations of Amnesty: Memory, Justice, and Impunity (2003, with Erik Doxtader).