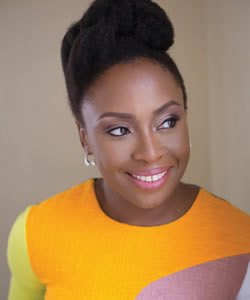 Chimamanda Ngozi Adichie is an award-winning author and speaker, whose work has been translated into over 30 languages. She has penned three novels: Purple Hibiscus (2003), Half of a Yellow Sun (2006), and Americanah (2013), as well as a short story collection, The Thing Around Your Neck (2009). Best known for Americanah, which won the National Book Critics Circle Award and was named one of the Ten Best Books of the Year by the New York Times Book Review, Adichie was a 2008 recipient of the MacArthur Foundation “genius” fellowship. She speaks around the world and has delivered two TED talks: The Danger of A Single Story (2009) and We Should All Be Feminists (2012), which has since been published as a book. Her most recent work was published in early March 2017, Dear Ijeawele, or A Feminist Manifesto in Fifteen Suggestions.