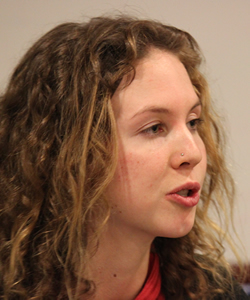 Codie Kane graduated from Georgetown in 2012 with a major in psychology and a minor in Spanish. As a research fellow for the Berkley Center's Education and Social Justice Project, Codie traveled to El Salvador in June 2011 to partner with the Universidad Centroamericana José Simeón Cañas (UCA). While there, she conducted interviews with teachers, students, administrators, and community members in order to explore the relationship between social and economic inequity and differential access to education in the San Salvador region. She focused specifically on UCA’s understanding and treatment of this issue in the context of their Jesuit tradition, with a particular emphasis on how their work has been influenced by the role of the Jesuit order in the 1980-1992 Salvadoran civil war.