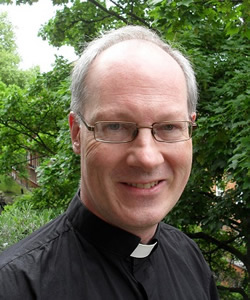 Damian Howard, S.J., is an English Jesuit priest and provincial superior of the Jesuit British Province. Howard previously was a lecturer at Heythrop College and vice-director of the Bellarmine Institute. His research interests include interreligious relations, particularly between Christians and Muslims. His publications include Ignatius of Loyola: Apostle to the Muslims (2016) and Being Human in Islam: The Impact of the Evolutionary Worldview (2011). He read Islamic studies at the School of Oriental and African Studies of the University of London and holds a doctorate in contemporary Islamic thought from the University of Birmingham.