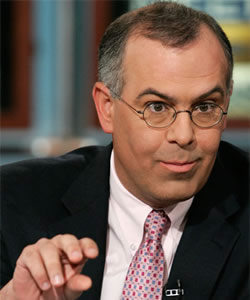 David Brooks has been an op-ed columnist for New York Times since September 2003 and is currently a commentator on Newshour with Jim Lehrer on PBS. He is the author of The Social Animal: The Hidden Sources of Love, Character, and Achievement (2011), On Paradise Drive: How We Live Now (And Always Have) in the Future Tense (2004), and Bobos In Paradise: The New Upper Class and How They Got There (2000). He has been a senior editor at the Weekly Standard, a contributing editor at Newsweek, and a contributor to Atlantic Monthly. Brooks joined Weekly Standard at its inception in September 1995, having worked at Wall Street Journal for the previous nine years, and rose to become op-ed editor. He is also a frequent commentator on National Public Radio and CNN. Brooks holds a B.A. from the University of Chicago.