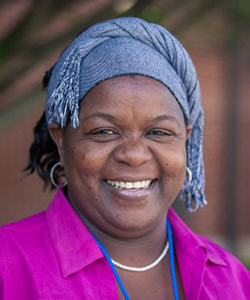 Doreen Ruto Jemutai was the founder and executive director of the Daima Initiatives for Peace and Development (DiPaD). She worked previously with UNICEF on peace campaigns with youth in Kenya prior to the 2013 elections and with USAID's Kenya Transition Initiatives aimed at stabilizing communities and institutions following the post-election violence in 2008. Ruto also worked with PACT World as a consultant on the PEACE II program and contributed to the research and publication Imagine Karamoja! – An Appreciative Inquiry into Resources for Peace. Ruto earned a bachelor’s of education degree from Kenyatta University in 1991 and worked as a secondary school teacher until 1998. She earned a master’s degree in human resource development from the University of Manchester (UK) in 2003, and was awarded a Fulbright scholarship to study conflict transformation at Eastern Mennonite University, graduating in 2006. Doreen passed away on January 21, 2016.