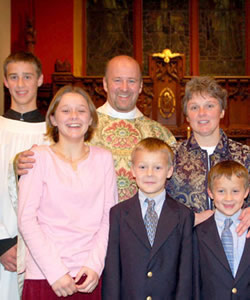 Rev. Dwight Longenecker is a Catholic priest ordained under the special pastoral provision for married former Anglican clergy. Longenecker was brought up in an evangelical home in Pennsylvania. After graduating from Bob Jones University, he went to study theology at Oxford University. He was eventually ordained as an Anglican priest and served as a curate, a school chaplain in Cambridge, and a country parson on the Isle of Wight. Later, he converted to Catholicism and was ordained under a special pastoral provision for married former Anglican clergy. He and his wife have four children. Longenecker is a prominent Catholic blogger who writes at Patheos.