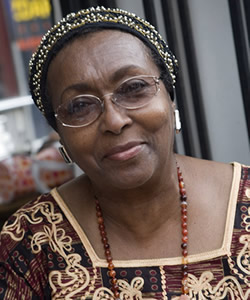 Edna Adan Ismail is the director and founder of the Edna Adan Maternity Hospital in Hargeisa, Somalia and a courageous activist and pioneer in the struggle to end female circumcision. Born in Hargeisa, Ismail was trained as a nurse in the United Kingdom and practiced as a midwife for many years. From 1987 to 1991, she was the World Health Organization's (WHO) Regional Technical Officer for Mother and Child Health. Her main responsibilities centered on issues relating to harmful traditional practices which affect the health of women and children. Ismail was also the WHO representative in Djibouti between 1991 and 1997. Additionally, Ismail has held many prestigious government posts, including foreign minister of the autonomous Somaliland region in northwest Somalia from 2003 until 2006. She is served as president of the Organization for Victims of Torture and president of Somaliland Family Health Association, as well as a member of the Presidential Commission on Higher Education in Somaliland. Ismail was formerly married to Mohamed Haji Ibrahim Egal, a prominent political leader who headed the government in British Somaliland prior to the union of Somaliland and Somalia, and later served as prime minister of Somalia (1967–1969). After Somaliland separated from Somalia, Mohamed Ibrahim Egal returned to become president of Somaliland (1993–2002). Currently, Ismail runs the Edna Adan Ismail Maternity Hospital, whose mission is to improve the health of Somali citizens.