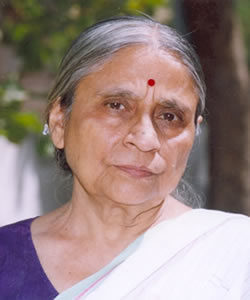 A respected leader of the international labor, cooperative, women, and micro-finance movements, Ela Bhatt founded the Self Employed Women’s Association (SEWA) in 1972 and served as its secretary general from 1972 to 1996. Born in Ahmedabad, India and trained as a lawyer, she has served many other roles, including as a political leader, and received many awards for her pioneering work, such as the 2010 Niwano Peace Prize. Among the worldwide networks she has been founder of are WIEGO (Women in Informal Employment: Globalizing and Organizing) and Women’s World Banking. She was chair of the International Alliance of Home based Workers (Homenet) and the International Alliance of Street Vendors (Streetnet). She also served as a trustee of the Rockefeller Foundation and is a member of the Elders. In 2015 she was appointed chancellor of the trustee board of Gujarat Vidyapith. She authored the book We Are Poor but so Many: The Story of Self-Employed Women in India (2005).