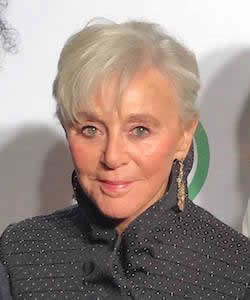 Eva Haller is a Hungarian-American philanthropist, activist, and executive. In addition to being a WFDD trustee, her service includes Board Chair of Free the Children, Trustee of the University of California, Santa Barbara, co-founder and President of the Campaign Communications Institute of America, Visiting Professor at Glasgow Caledonian University, Board member of Counterpart International, Sing for Hope, and Creative Visions. Born in 1930 in Budapest, Hungary, in 1942, she joined her older brother underground in the Hungarian resistance where she created anti-Hitler leaflets. She was hidden among students at the Scottish Mission, which was raided by soldiers when they discovered that the Institute was hiding Jewish students. Eva convinced a Nazi officer that she was too young and too beautiful to die and to let her escape; she remained in hiding throughout World War II. Eva eventually reached New York, where she cleaned houses and concurrently earned a master's degree in social work from Hunter College. In 1965, she joined Dr. Martin Luther King, Jr. in the Selma march. Along with her late husband, Murray Roman, Eva co-founded the Campaign Communications Institute of America, a marketing and research company that revolutionized the use of telemarketing in political campaigns. In 1968 Murray and Eva Roman set off to volunteer with UNICEF in Southeast Asia for close to a year. The couple returned to the United States with a renewed commitment to social issues. She and her husband re-opened their business, which became one of the first to advocate for women’s rights. With help from the proceeds of their successful business, they continued the pursuit of their philanthropy. After Murray died, Eva married Yoel Haller and has pursued her philanthropic career, widely revered and honored with numerous awards.