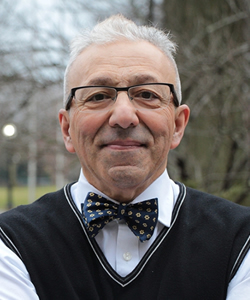 Fathali Moghaddam, professor of psychology and a faculty fellow at the Berkley Center, won the 2020 Career Research Achievement Award at Georgetown University. The award recognizes a scholar whose work is distinguished and influential well beyond the Georgetown community.

Fathali Moghaddam is professor in the Department of Psychology and a faculty fellow at the Berkley Center. He previously was director of the Conflict Resolution Program in Georgetown's Department of Government. Moghaddam's expertise include culture and intergroup conflict, with a particular focus on the psychology of globalization, radicalization, human rights and duties, and terrorism. His recent publications include The Psychology of Democracy (2015), The Psychology of Dictatorship (2013), Psychology for the Third Millennium (2012, with Rom Harre), The New Global Insecurity (2010), and Multiculturalism and Intergroup Relations: Psychological Implications for Democracy in Global Context (2008), as well as numerous other books, journal articles, and book chapters. He is the editor of Peace and Conflict: Journal of Peace Psychology. He was awarded the Outstanding International Psychologist Award for 2012 from the American Psychological Association’s Division of International Psychology. He holds a B.A. from the University of Liverpool and M.Sc. and Ph.D from the University of Surrey, England.