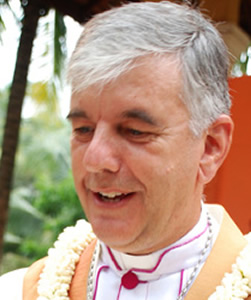 Enrique Figaredo Alvargonzales, S.J. was born in Gijon, Spain, in September, 1959. He entered the novitiate of the Jesuits in 1979 and was ordained a priest in Spain in 1992. Figaredo, who is better known as Father Kike, has worked with Cambodian people, particularly the disabled, since 1985, which has earned him the nickname "the Bishop of the Wheelchairs." He began with the Jesuit Refugee Service (JRS) at refugee camps in Thailand from 1985 to 1988, and later, from 1993 to 2000, worked at Banteay Prieb (Center of the Dove), a vocational and skill-training center for the disabled outside of Phnom Penh. He was appointed apostolic prefect of Battambang on April 1, 2000 and was installed in July 2000.