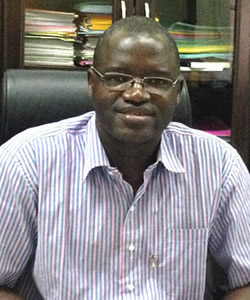 Abbé Georges Diouf is the Diocesan Director of Catholic Teaching of the Archdiocese of Dakar (Enseignement catholique de l’Archdiocèse de Dakar). He was raised in a Catholic community in Fadiouth, Senegal and completed most of his studies in the Catholic education system. After finishing his high school studies, Abbé Diouf entered seminary and was ordained as a priest in 1995. He also obtained a master’s degree in educational sciences at the Catholic University of the West in Angers, France. He has served in many roles within the Catholic Church of Senegal, focusing largely on youth and education.