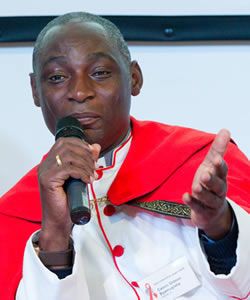 Reverend Canon Gideon B. Byamugisha is an Anglican priest serving at Bishop Samuel Chapel and the founder of the International Network of Religious Leaders Living with or Personally Affected by HIV and AIDS (INERELA+, expanded from its roots as an African network [ANERELA+]). He previously was canon of St. Paul's Cathedral in Namirembe and Holy Cross Cathedral in Lusaka, as well as goodwill ambassador on HIV and AIDS for Christian AID (UK) for Eastern Africa, Sudan, and the Horn. In 1992, he became the first religious leader in Africa to declare he was HIV positive. He also founded the Hope Institute for Transformational Leadership and Development. He has worked as an advisor to World Vision and has traveled internationally to speak about HIV/AIDS, including to a conference at the U.S. White House in December 2002. Byamugisha is the 2009 Winner of the Niwano Peace Foundation Award and Prize.