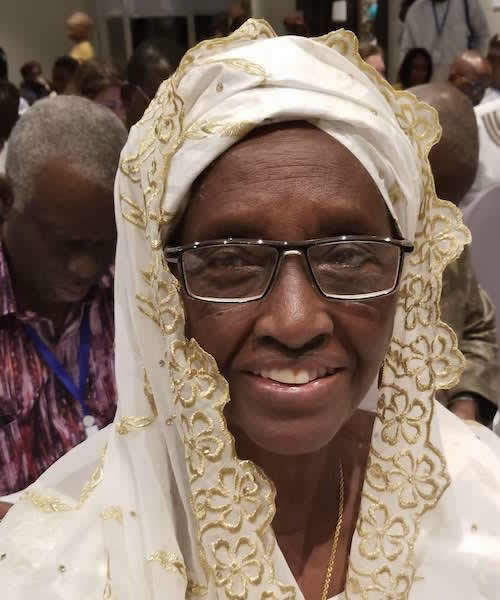 Madame Cissé Hadja Mariama Sow is president of the Union of Women Ulama of Guinea. Over her long political and professional career, covering several sectors, her work for women’s causes has been a consistent highlight. Born in 1942 into a large family in Guinea’s Labé region, she became involved in politics around the time of Guinea’s independence in 1958. In 1972, she was elected general secretary of the Union of Revolutionary Women of Guinea and to the National Assembly, where she sat for 12 years. She was the first president of the West African Women’s Association, and was involved with the Economic Community of West African States. She has worked with various non-governmental women’s associations, as well as with youth organizations, particularly the youth wing of the African Democratic Rally and the National Organization of Free Unions of Guinea. She has a long involvement in interreligious peace organizations and efforts, and she has also worked for national reconciliation. She is a Co-President of Religions for Peace. As President of the Union of Women Ulama of Guinea and the Coordinating Office of Muslim Women’s Associations of Guinea, she advances religious participation in national and international affairs and interreligious cooperation. She was one of the 1000 women nominated for the 2005 Nobel Peace Prize. Since 2017, Madame Cissé Hadja Mariama Sow has served as the president of the Group of Religious Leaders for Health, Development, and Peace in Guinea.