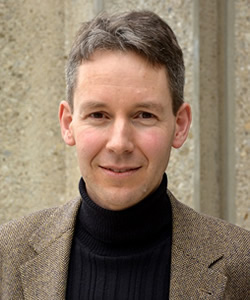 Hansjörg Schmid is director of the University of Freiburg's Swiss Center for Islam and Society. His research interests include hermeneutic questions of interreligious ethics, political ethics, Christian-Muslim relations in the European context, and religions in public space. Since 2012, he has also been a lecturer in Christian social ethics at the University of Munich. He previously was director of interreligious dialogue at the Academy of the Diocese of Rottenburg-Stuttgart. His publications include Islam in the European House. Towards an Interreligious Social Ethics (2013) and Church and Umma: The Community of Believers in Christianity and Islam (2014). He is also editor of the eight-volume book series Theologisches Forum Christentum – Islam. Schmid studied Catholic theology at Freiburg, Jerusalem, and Basle, receiving his Ph.D. in New Testament studies in 2002. In 2010 and 2011 he completed his habilitation thesis on the relationship of religion, state, and society as seen by contemporary European Muslim authors and Catholic social ethics.