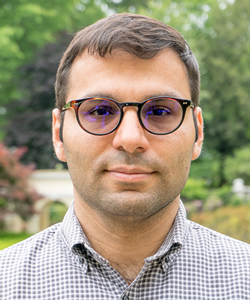 Hussein Abdulsater is assistant professor in the Program in Arabic and Middle Eastern Studies at Notre Dame University. His research focuses on Muslim theological and ethical discourses in their interactions with each other and with non-Muslim discourses, and it is also concerned with depictions of major theological themes and schools in classical Arabic literature and historiography. The author of Shiʿi Doctrine, Muʿtazili Theology: al-Sharīf al-Murtaḍā and the Systematization of Imami Discourse (2017), he has also published articles on the confessional and communal development of Shi'ism, sixteenth-century Qur'anic exegesis, and on the freedom of conscience in classical Islamic theology. He holds a Ph.D. in religious studies from Yale University and an M.A. in Arabic language and literature from the American University of Beirut.