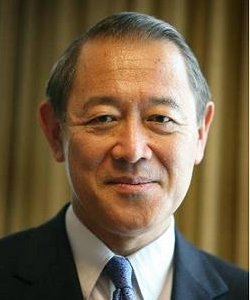 Ambassador Ichiro Fujisaki is a Japanese diplomat who served as ambassador to the United States from 2008 to 2012 and is currently chairman of International Strategies at Sophia University in Tokyo. He previously was Ambassador to the United Nations and to the World Trade Organization in Geneva, serving as the chairman of the Executive Committee of the United Nations High Commissioner for Refugees. From 1995 to 1999 he worked in Washington, DC as the political minister of the Embassy of Japan. Fujisaki has also held posts in Jakarta, Paris (OECD), and London; his other Ministry of Foreign Affairs posts include terms as deputy director-general for Asian Affairs and director-general for North American Affairs before being appointed as the deputy foreign minister. His teaching positions include two years (1987-188) as a research associate at the International Institute for Strategic Studies and four years (1991-1995) as a lecturer of International Relations at Sophia University.