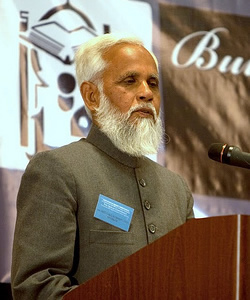 Dr. Ishtiyaq Ahmad Zilli is the director and secretary of Darul Musannefin Shibli Academy in Azamgarh, India, which specializes in research on Islamic learning, medieval Indian history, and oriental studies. Zilli is also the founding president of the Institute of Qur'anic Studies (Idarah Ulumul Qur'an) in Aligarh, India and founding editor of the Magazine of Qur'anic Studies (Majallah Ulum Al Qur'an). Zilli also taught history at Aligarh Muslim University from 1978 to 2004. His areas of specialization include historiography, Muslim religious thought, and medieval Indian history, particularly the Delhi Sultanate. Zilli is the author of, among others, The Mughal State And Culture 1556-1598: Selected Letters And Documents From Munshaat-I-Namakin (2007). Zilli earned his B.A. from Lucknow University and his M.A. and Ph.D. from Aligarh Muslim University.