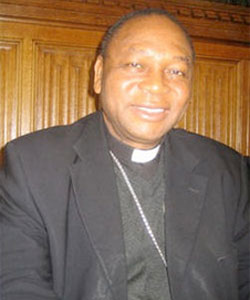 John Onaiyekan has been the Archbishop of Abuja since 1994 and was named cardinal in November 2012. He was previously the president of the Christian Association of Nigeria, president of the Catholic Bishops' Conference of Nigeria, and Bishop of Ilorin. He participated in the 2008 Madrid forum of the Alliance of Civilizations on the role of religious leaders in promoting security and in 2012 was Pax Christi International’s Peace Laureate. Born in Kogi State, Nigeria, Onaiyekan completed his religious studies in Rome in 1969 and was ordained as a priest later that year. He subsequently taught at St. Kizito's College, Isanlu and became rector of St. Clement Junior Seminary in Lokoja in 1971; he earned his doctorate in 1976, afterwards becoming Vice Rector of Saints Peter & Paul in 1977.