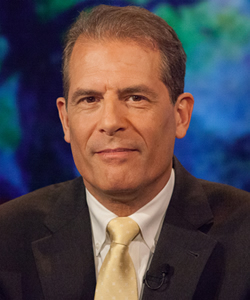 Jonathan Landay is a reporter for Reuters covering national security. He previously worked for McClatchy/Knight-Ridder, the Christian Science Monitor, and United Press International. Landay partnered with Warren Strobel on a series of stories skeptical of the George W. Bush administration's claims about Iraq's weapons of mass destruction as justification for war; they received the Raymond Clapper Memorial award from the Senate Press Gallery for their work. Landay, Marisa Taylor, and Ali Watkins were 2015 Pulitzer Prize finalists for their work on the Senate Intelligence Committee's report regarding the CIA's torture programs.