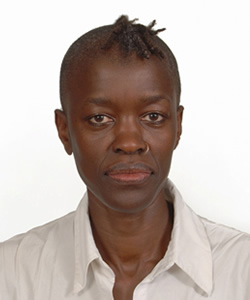 Joy Mboya is the executive director of the Godown Arts Centre, a nonprofit facility that provides subsidized space and residency opportunities for Kenyan artists, as well as artistic public programs for local audiences. She is also a trustee of Gaara Dance Foundation, which aims to develop contemporary African dance. In 2004 she received the National Women’s Council of Kenya Merit Award for her contribution to the performing arts. The minister of gender, sports, culture and social services appointed her to the Kenya Cultural Centre's Governing Council. Mboya began her career as the lead singer for Kenyan pop band Musikly Speaking. In 1993, she re-located to Sydney, Australia, to pursue post-graduate studies in voice at the National Institute of Dramatic Arts. Returning to Nairobi in the late 1990s, she initiated a training program in performance-making for young people aged 15 to 22 years. This organization, Fame Trust, was among the founder groups of a communal arts space concept which became the Godown Arts Centre.