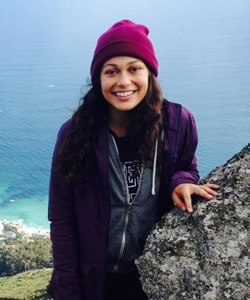 Khadija Khan, a Raines fellow (GOFAR), is an undergraduate in the Georgetown College class of 2017 studying justice and peace studies with a concentration in feminism and social movements. She spent the entirety of her junior year studying post-apartheid conflict resolution and decolonization at the University of the Western Cape in Cape Town, South Africa. During her stay, South Africa's largest student protests since the 1976 Soweto shootings broke out. Khadija was actively involved in the movement; she created a documentary about women in the movement in October 2015 and conducted a research project on intersectionality throughout 2016. Upon her return to Georgetown, she hopes to continue her involvement with student movements, produce writing on her experiences and findings, as well as explore socially just research methodologies.