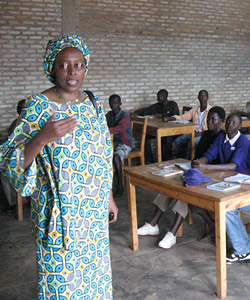 A deeply Catholic woman, Marguerite (“Maggie”) Barankitse is the founder of Maison Shalom, a complex of schools, hospitals, and a network of care extending throughout Burundi, and has focused on children’s welfare and rights while challenging ethnic discrimination. Born in 1957 in Ruyigi, southern Burundi, she grew up identified as a Tutsi in that ethnically divided country. After her father died when she was six years old, her mother raised Maggie and her brother, and she became a teacher. When Burundi’s terrible civil war erupted in 1993, Barankitse, then 36 years old, had seven adopted children, both Hutus and Tutsis. She witnessed and was the victim of murderous attacks but survived. She found herself caring for hundreds of children who had no one to care for them, prompting her to found Maison Shalom. She is the winner of many international awards, including the US$1 million Opus Prize in 2008.