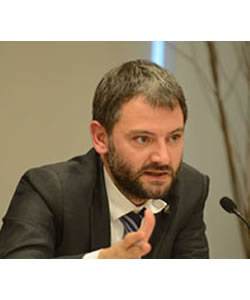 Mauro Garofalo has served as head of international relations for the Community of Sant’Egidio since 2012. He worked with Sant’Egidio in other capacities from 2006, and has long been involved in the Community’s secretariat for inter-religious and ecumenical dialogue. Garofalo served as a Conflict Resolutions Unit officer from 2008, supporting international rescue operations in Afghanistan and Senegal. He participated in and contributed to various peace processes across Africa, the Middle East, and Far East Asia, as well as emergency response actions and development projects. In addition to his international work, he has been involved since 1992 with various grassroots service initiatives of the Community of Sant’Egidio. He holds a Ph.D. and second level master’s degree; he is an historian of arts and a trained archeologist.