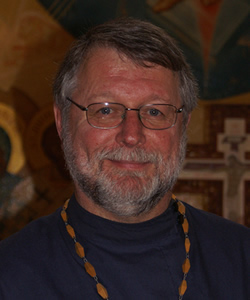 Rev. Michael Plekon is professor of sociology/anthropology in the Religion and Culture Program at the City University of New York's Baruch College. He has published extensively on persons of faith and the shapes of holiness in our time, most notably Living Icons: People of Faith in the Eastern Church and Holiness in Our Time (2002), Hidden Holiness (2009), Saints As They Really Are: Voices of Holiness in Our Time (2012), and Uncommon Prayer: Prayer in Everyday Experience (2016). He has also edited and translated contemporary theologians such as Elisabeth Behr-Sigel, Paul Evdokimov, and Nicholas Afanasiev on ecumenical work, spirituality, and liturgy in modern society. He is a priest of the Orthodox Church in America, assisting at St. Gregory the Theologian Church in Wappingers Falls, New York. He received his A.B. from the Catholic University of America and his M.A. and Ph.D from Rutgers University, where he was a student of Peter L. Berger.