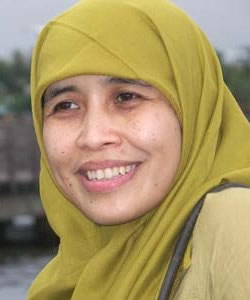 Nani Zulminarni has been involved in activism on gender issues in Indonesia since the mid-1980s. She was one of the founders of ASPPUK, a national network of NGOs working on women’s and economic issues, and she served as the chair of its executive committee from 1995 to 2001. She has been in executive councils for various other organizations and coalitions, such as ASPBAE—Asia South Pacific Association for Basic and Adult Education (2000–2008), and SEAPCP --South East Asia Popular Communication Program, a regional network of community-based organizations focusing on community organizing activities in the South East Asia region (2004–2008). In addition, she is a member of Social Watch Asia, which monitors poverty alleviation efforts in different countries in the region. Also a member of AWID, Zulmarnani joined Musawah in 2009 and has worked towards establishing a network of Indonesian Muslim scholars and activists fighting for equality in the Islamic family.