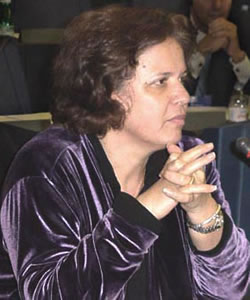 Dr. Nurit Peled-Elhanan is a Lecturer in Language Education at Hebrew University in Jerusalem specializing in discourse in Israeli education with emphasis on visual and verbal presentation of Palestinian and non-western Jews. Since the death of her 13 year-old daughter in a suicide bombing in Jerusalem, Israeli peace activist Peled-Elhanan has worked to promote dialogue between Israelis and Palestinians. She and her family work with the Palestinian and Israeli Bereaved Families for Peace. Her two elder sons are active in the peace movements of the Refusenik and Combatants for Peace, a new movement of Israeli and Palestinian ex-fighters. Peled-Elhanan is the recipient of the European Parliament 2001 Sakharov Prize for Human Rights and Freedom of Speech. She is the daughter of the late Maj. Gen. Mattityahu ("Matti") Peled, a military commander and politician who later advocated a two-state solution.