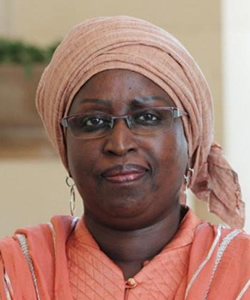 Penda Mbow is an associate professor of history at Cheikh Anta Diop University in Dakar, Senegal, as well as the Senegalese president’s personal representative to the International Organization of La Francophonie. Among her many areas of expertise are African intellectual history, Islam, and gender studies. In the past, she served as Senegal's minister of culture and as cultural advisor to the Senegalese Department of Ethnography and Historical Heritage. Mbow has received numerous academic awards, including a Fulbright grant and a Rockefeller Foundation award for research at the Bellagio Center in Italy. She received the Jean Paul II Peace Prize from Boston University to honor her work to advance peacebuilding and conflict resolution. She was named a Knight of the French Legion of Honor (Chevalier de la Legion d'Honneur Francaise) in 2003 and a Commander of the National Order of Merit (Commandeur de l'Ordre National du Merite) in 1999. Mbow holds a doctorate in medieval history from the University of Aix-Marseilles.