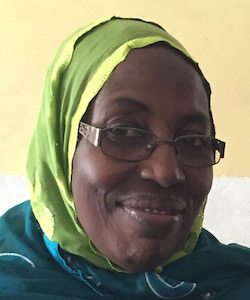 Rabiétou Cissé is the founder of a private Franco-Arabic primary school in Malika, a suburb of Dakar, Senegal. She has worked in education for several decades, including running two daaras (Qur’anic schools) and has brought together female teachers to form the l’Union des femmes pour la promotion du daara modern (Union of Women for the Promotion of the Modern Daara) in order to advocate for the modernization of daaras and eliminate child begging. Ms. Cisseé is also the president of an organization for zakat and aid, which stemmed from her prior work with zakat and care of orphans, providing them with education, clothes, and healthcare.