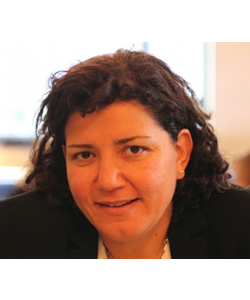 Rana Husseini is an award-winning journalist for the Jordan Times and human rights defender. She has focused on the brutal crimes that are committed against Jordanian women in the name of family honor, culminating in the book Murder in the Name of Honor: The True Story of One Women's Heroic Fight Against An Unbelievable Crime (2009). Husseini has earned nine local and international awards, including a medal from Jordan’s King Abdullah II in 2007, for reporting on such crimes. Her work resulted in the formation of the National Jordanian Committee to Eliminate so-called Crimes of Honor in 1998. Husseini has also worked as a regional coordinator on a UNIFEM campaign to fight violence against women. She is a board member for several organizations, including the Man Up Campaign (USA), Jordan Football Association, and Jordanian National Committee for Demining and Rehabilitation.