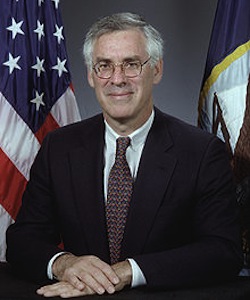 Richard Danzig is a lawyer and the board chairman of the Center for a New American Security, a national security think-tank. He also is a Director at the RAND Corporation and a member of the Defense Policy Board. Previously, Danzig served as Under Secretary of the Navy and then Secretary of the Navy during the Clinton Administration, as well as a senior advisor on national security matters to Barack Obama during his presidential campaign. He has taught law at Stanford and Harvard Universities and was awarded a Prize Fellowship of the Harvard Society of Fellows and a Rockefeller Foundation Fellowship. He also worked as a partner in the international law firm Latham & Watkins. Danzig is an alumnus of Reed College, received his JD from Yale Law School, and was a Rhodes Scholar at Oxford University, where he earned his PhD.