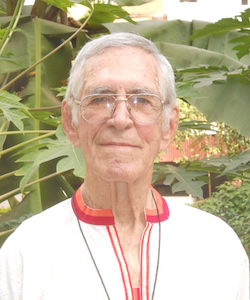 Richard William Timm, CSC, known as Father Timm, was an educator, zoologist, and active participant in social development work who lived in Dhaka from October 1952 until his death in September 2020. The former superior of the Congregation of Holy Cross in Dhaka, he was also one of the founders of Notre Dame College and served as the sixth principal. Father Timm was ordained at Notre Dame in 1949. He was then assigned to get a one-year master’s degree in biology in order to found the science department of a new college for boys in Dhaka, East Pakistan. He earned his M.S. and Ph.D. in two years from the Catholic University of America. He joined Caritas as a planning officer, taking charge of war-time projects for devastated villages following the civil war in Bangladesh. In 1974, after starting the Justice & Peace Commission, he served as the executive secretary for 23 years.