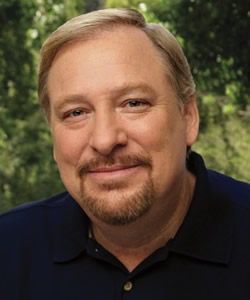 Rick Warren is the founding pastor of Saddleback Church, a non-denominational California megachurch, and is a leading evangelical author of the best-selling book The Purpose Driven Life (2002). Warren has staked out positions and supported programs that address a range of public policy issues, including poverty, education, and HIV/AIDS, both nationally and internationally. During the 2008 presidential election, he hosted candidates senators Barack Obama and John McCain at a public forum at Saddleback Church; he subsequently gave the invocation at President Obama's inauguration in January 2009. TIME and U.S. News & World Report have recognized Warren as one of the most influential Christian leaders in the United States.