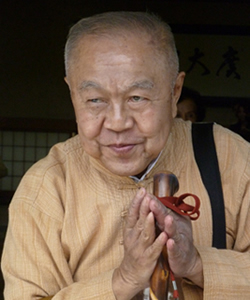 Sulak Sivaraksa is a Buddhist spiritual leader and humanitarian best known for his social criticism and grassroots organizing that uses spiritual models to advocate for sustainable change to better the lives of poor, rural Thais. For his activism and writings, he has been exiled from Thailand (1976-77 and 1991-94), jailed four times, and been accused of defaming the Thai monarchy. Born in Thailand in 1933, he studied law in the United Kingdom. Returning to Thailand in 1961, he taught at Chulalongkorn University, founded the Social Science Review (Sangkhomsaat Paritat), and initiated social and ecological organizations such as the Spirit in Education Movement (SEM), and the International Network of Engaged Buddhists (INEB). Sivaraksa has been a visiting professor at UC Berkeley, the University of Hawaii, and Cornell, and he was awarded the Right Livelihood Award (1995), the UNPO Human Rights Award (1998), the Millennium Gandhi Award (2001), and the Niwano Peace Prize (2011).