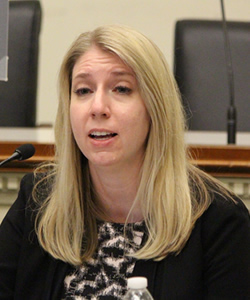 Tina L. Mufford is senior policy analyst for the East Asia-Pacific region at the U.S. Commission on International Religious Freedom (USCIRF). She actively monitors and reports on religious freedom violations in Burma, China, Indonesia, Laos, Malaysia, North Korea, and Vietnam. She is the author of, among others, "Suspended in Time: The Ongoing Persecution of Rohingya Muslims in Burma" (December 2016) and "A Right for All: Freedom of Religion or Belief in ASEAN" (September 2017), a USCIRF report about freedom of religion or belief in the Association of Southeast Asian Nations region.