Concrete Jungles in the Middle of Mountains 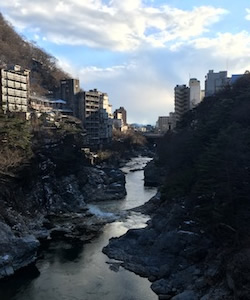 By the time I was finished bathing in a hotel’s indoor hot spring and started to head home, the sky was pitch back. It was a beautiful, wintry Sunday, and I had decided to take a day trip to Kinugawa Onsen, a resort town two hours from Tokyo. I thought it would be a nice change from the jumble of overhead wires and scramble crossings, a getaway into the countryside.

Except it wasn’t. Abandoned hotels dotted the sides of cracked paths, silent and sad monuments to the resort town’s more prosperous ways. The only way to see the river, for which the town is named, is to cross a wide concrete bridge surrounded by two high-rise hotels; the hum of the air conditioners vibrates louder than the chummy river below.

From time to time, learners of Japanese (that is, me) are told about the importance of nature in Japanese culture. The kaleidoscope variety of food in kaiseki-ryori, the equivalent of, perhaps, French haute cuisine, changes with the four seasons. The country’s spectacular mountains are themselves gods with Shinto shrines dedicated to them. A haiku does not count as a haiku if it does not contain a kigo, a word that refers to the seasons, or plants, or animals. One of the most famous haikus by Matsuo Basho involves a frog jumping into a pond.

Yet, everyday life in Kinugawa Onsen seems revolve around man-made objects. There is, in fact, nothing to see outside, because the hot spring hotels’ exteriors are so ugly; the streets are dim, desolate, and a little creepy after dark. Overnight stayers can find everything they need within the confines of the hotel compound, from arcade games to television dramas and smoky bars. Even the gift shops around town only sell manufactured foods. It seems that the surrounding area is known for its strawberries, but the actual strawberries in their original form are nowhere to be found. Instead, they are mixed into sweets, potato chips, and cakes and dye the colors of soft-serve ice cream, just so that, as a marketing strategy, these products can claim that they were made with those famous strawberries.

For what purpose does one travel to a place like Kinugawa Onsen, or indeed, to any place at all? The paradox of tourism is that, in thinking about how to attract more business and more profits, local governments and business owners become tempted to conjure up attractions to entice tourists, rather than the other way round. Perhaps once upon a time this town was a pleasant and quiet place to live in for residents, its river so beautiful and so wild and the free-flowing hot springs so healing that word about it spread to travelers from Tokyo. In 2016, you can find pamphlets around the train station for rather thoughtlessly built attractions, including a dinosaur park and a miniature sculpture theme park, where you can pretend to travel the world by looking at scale models of Westminster Abbey and Harlem, New York.

John Muir told us “everyone needs beauty as well as bread, places to play in and pray in, where Nature may heal and cheer and give strength to body and soul alike.” This is something parts of Japanese culture discovered centuries before Muir began advocating for preserving the wilderness in the United States and appearing in environmental ethics textbooks. Here’s hoping that one day, Kinugawa Onsen finds more value in the lush mountains and tall trees that surround its valley, rather than the concrete hotel boxes that await demolition.