As an Education and Social Justice Summer Research fellow, I have spent the past two weeks interviewing the workers at Protagonizar, a small microfinance institute founded by the Jesuits in the Province of Buenos Aires, Argentina, and their clients, the entrepreneurs. The research focuses on how the institute works at the intersection of education—infusing values of financial accountability into the community—and social justice—promoting the economic as well as personal development of the entrepreneurs. Protagonizar works in a very impoverished area where the majority of its clients lack bank accounts and otherwise would not have access to loans. The loans they do receive from Protagonizar are of a minimal amount, relatively speaking, ranging from $50 to $3,000 US dollars, with an average loan of $300 US dollars, over the span of about ten weeks. Yet, it is through these loans that the entrepreneurs have been able to start and progress in their own businesses. For example, there are entrepreneurs with their own kiosks, attached to their houses. Others have their own bakeries, pet shops, or are street vendors, selling clothing or food among a myriad of many other microbusinesses.

As a result, in this busy state, collecting information on the operational details and of course weaving in the many personal stories and lives of those affected by Protagonizar, the days pass in a flurry and I have not left as much time for reflection as I would like. Thus, I was momentarily thrown off-guard early last week as Miguel, one of the credit assessors for Protagonizar, asked for my opinion—on their work, on them, on all of it—as we were walking to visit the entrepreneurs and their businesses. I paused, trying to collect my thoughts and then re-organize them in Spanish; it was not going to be an easy feat. I took in my surroundings—the air, as it did every day, encased the city in heavy smog, tainted with the persistent remnants of burnt rubber and marijuana. The unpaved road was a gnarled muddy mess: standing water, stray dogs, and trash littered the landscape. I could not get over the trash; it was everywhere. Small houses in varying conditions lined the road—some had walls of cement or brick, others were nothing more than sheets of metal stacked against wood with dirt floors. Gates, fencing, or walls of some sort always encircled them as a barrier, clothes hung on a line out front. In some cases, there would be a rusted car parked in the street. It was not a pretty scene. We side-stepped a dead chicken in the gutter, and I began to talk.

I was impressed, beyond impressed, first with how the organization worked operationally, its mission, and the dedication of its workers. It is very clear that they care about their clients as individuals beyond their capacity to pay. With every visit to the entrepreneurs, they inquire about their health and ask about the family. They know what is going on in their lives and on many occasions are invited to birthdays or other family parties. It’s a mutual relationship, for the entrepreneurs also see those at Protagonizar as confidants and friends. Granted, there is still a line of business, and there are many policies that must be followed to sustain the organization so that others will be able to benefit from the access to credit.

However, more than this, I am impressed with the change ignited within the entrepreneurs. After several interviews, I have become accustomed to the rhythm of our talks, and the waves of our emotions as one minute they will be sharing with me difficult moments in their lives where every day was a struggle, and abruptly the conversation will swing in the opposite direction as their eyes gleam with pride as they are showing me all the growth in their business, reminiscing on the days when it was a fourth of the size or when they were selling food on the streets, but now they sell it in their houses. When I ask where they have invested their earnings, they’ll point to a wall in the house, or talk about how now their kids go to a private school. This actualization of potential and the hope in the entrepreneurs amazes me. This is the path to change. This is systemic change, because the people choose it for themselves; it reminds me of work I have done in the past with education, when a student achieves something she did not think was possible. It was that spark, the moment of realization that makes all the difference. In trying to convey this to Miguel, I grasped at the concept, but lacking the vocabulary in English and even more so in Spanish. I apologized for my disorganized response, and looked at him to make sure he understood my sentiment despite the language barrier. He did. After a moment he gave me the word I was looking for: empoderamiento. Empowerment. 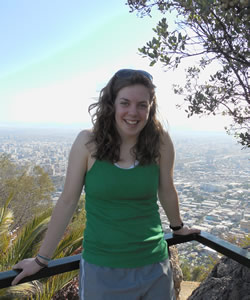 Sarah Baran graduated from Georgetown University in 2014 with a major in government and a minor in education, inquiry, and justice. She participated in the Berkley Center's Junior Year Abroad Network while studying in Santiago, Chile during the spring semester of 2013. Sarah also contributed to the Education and Social Justice Project in the summer of 2013 by conducting research on a Jesuit-founded microfinance institute in Buenos Aires, Argentina.
Opens in a new window