I have a closet in my head where I go to escape. It is my safe space. In there I am affirmed, I am seen, I am heard, I am experienced, I am known fully and am invited to fully know myself. And I wish every place can be as safe as my closet.
There is a theology that informs homophobia, transphobia, sexism, patriarchy, racism, and xenophobia. This theology is often rooted in scriptural reasoning that is rooted in a white cis heterosexual male framework that informs how the world is understood.

As you read this article, here are some definitions to be aware of:

Cisgender/cis: This is a term for someone who exclusively identifies as their sex assigned at birth. The term cisgender is not indicative of gender expression, sexual orientation, hormonal makeup, physical anatomy, or how one is perceived in daily life.

Gender queer: This term refers to persons who do not subscribe to conventional gender distinctions but identifies with neither, both, or a combination of male and female genders.

Transgender: This term refers to a person whose self-identity does not conform to conventional notions of male or female gender.

Pansexuality: The sexual attraction, romantic love, or emotional attraction toward people regardless of their sex or gender identity. Pansexual people may refer to themselves as gender-blind, asserting that gender and sex are insignificant or irrelevant in determining whether they will be sexually attracted to others.

Agender: An umbrella term encompassing many different genders of people who commonly do not have a gender and/or have a gender that they describe as neutral.

I could go on to list many other terms, but I am sure you see where I am going with this. When we begin to unpack issues of safe spaces in the church, it’s important to unpack the theologies that are underpinned in the church being unsafe for LGBTIQ+ people of faith. Once we unpack and repack our theology of sexual and gender identity, safe spaces become the ripple effect of a deconstructed theological understanding of sexual and gendered identity. There is no denying the fact that sexual and gender identity have always been fluid. These identities have always found themselves at odds with gender normative framing of identity.

What informs our spaces and our understanding of space, both physical and non-physical? As a Christian, my worldview is informed by my reading of scripture. My worldview is informed by how I relate to my scripture and how I engage with it. But I also understand that when I come to my scripture I bring my whole self to it: my racial identity, my economic class, the fact that I am a feminist. I also bring my sexual and gendered identity to the scripture and try to make sense of this text in light of who I understand myself to be. I bring all of myself and seek to reconcile what I am reading with who I am. I then see that there seems to be a clash of identity. Because the spaces that I find myself in are heteronormative, and heteronormativity is the norm. It is highly encouraged and highly esteemed. There always seems to be a clash that I am forced to reconcile.

I have been trying to figure out what has informed the heteronormative spaces that we find ourselves in. Religion and culture are key in this discourse, while they are both fluid. These norms, which continue to shape how we read and think of scripture, are constantly being pushed out, being challenged, being questioned and under scrutiny. Not because they are inherently evil, although maybe they are, but because we see more each day that things are changing.

The politics of gender fluidity are complex. They are sensitive and volatile. They call for a genuine re-engagement of how we understand sexual and gender identity. They call for a deep disruption of our gender and sexual paralysis.

Ally: Someone who advocates and supports a community other than their own. Allies are not part of the communities they help.

What does it mean to be an ally as the church?

I am a black womxn from South Africa, a country that has deep roots of racism and discrimination. It is a new democracy coming out of an apartheid history that has deep theological and religious roots in its racism. I, through black liberation theology and its many shades, have been able to reconcile my racial identity with the things in the Bible that are hard to stomach. Daily, I seek to reconcile these realities. As a womxn, I read verses that tell womxn to be silent, no matter what the context is. But then I also read Jesus telling Mary Magdalene to “go and tell,” as a liberating instruction for womxn, the good news of Jesus everywhere and anywhere. I and many others have been able to shift slowly outside the gender roles that we have found clear and unclear in scripture. We have allowed ourselves to admit that gender roles are not fixed, that they are fluid. That maybe it is okay for womxn to be in the workplace (we’re still for fighting equal pay). We have allowed ourselves to reimagine gender roles in the household. But these are still within a heteronormative understanding of rationality.

I am confronted with my hypocrisy always, if as a womxn I can find liberating verses in scripture after reading some that are opposite to this freedom I have found. Why is it then hard to find verses that liberate LGBTIQ+?  If these paradoxes exist, and we are still able to reconcile them, then surely there is space to find a theology of safeness for LGBTIQ+ people of faith. So what steps have we missed in this conversation about safe spaces for LGBTIQ+ people of faith?

As Christians, our understanding of what space is, and what and how God’s space is informed would make it appear that this space is very normative. This space will automatically not include anyone except Adam and Eve. This space is exclusive, and its exclusive nature is informed by this text. Can we then say that God is inviting us to extend the space and extend our understanding of space? And the invitation is not only to reimagine space, but also to use our prophetic imagination to liberate scripture from gender heterosexuality.

What does this safe space look like? My queer friends helped me answer this question.

“A safe space is one that would focus on my walk with Jesus and walking with him intimately.”

“A safe space would be one that honors what God is doing in my life and not demonize me.”

“A safe church would be one that speaks to issues of gender, sexuality, classism, and racism in an honest and transparent way.”

“A safe space would be one that does a deep work of decolonization of scripture and theology.”

Because the church has been complicit where injustices are concerned, there is now a social imperative for it to investigate the theologies that have allowed for injustices and begin to journey honestly in these matters. The church needs to be reflective in how gender interplays with scripture where it is damaging and violent to LGBTIQ+ people of faith. This is an invitation for the church to be transformative in how it does ministry. And it is not about creating safe spaces; it’s about making the church a safe space for all. There are Braille Bibles available for blind people in the congregations, and the pews are shifted for congregants who use wheelchairs. The invitation is that the church may engage with these complexities, and that it may be a space safe where all can feel safe and affirmed.

This is an invitation to honestly and compassionately engage. 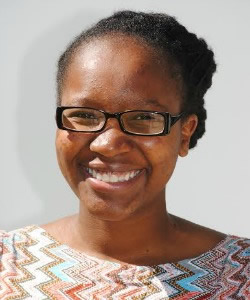 Ayanda Nxusani is a scholar interested in transitional justice, with a special focus on violence prevention, peace, trauma healing, and reconciliation for both victims and perpetrators of gross human rights violations. She was a participant in the International Higher Education Interfaith Leadership Forum. Nxusani graduated from the University of Cape Town with a bachelor's degree in politics, international relations, and economic history, and she is a 2016 graduate of Hartford Seminary’s International Peacemaking Program.
comments powered by Disqus

Religion and Displacement in the Republic of Georgia: Field Notes