The Berkley Center's Junior Year Abroad Network (JYAN) 2008-2009 members met at the annual JYAN dinner to present reflections on their time spent living and studying around the globe. Forty-two Georgetown students studying on five different continents participated in the program during the 2008-2009 academic year. Their reflections were formally published in the report which was presented to them during the dinner.
Through JYAN participants write "letters from abroad" dealing with questions of religion, culture, and politics in a different part of the world. Sharing these letters with one another through the Berkley Center website, the students engage in dialogue about their common experiences and perceptions of their different cultures, particularly the many roles that religion plays in their host country's culture. When the participants return to Georgetown, they meet several times to reflect on their experiences in order to communicate them to the wider Georgetown community and beyond. 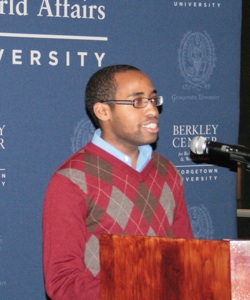 Forty-two Georgetown students studying on five different continents participated in the Junior Year Abroad Network (JYAN) in 2008-09, sharing reflections on their time spent living and studying around the globe. Participants wrote "letters from…