Can the law promote moral values even in pluralistic societies such as the United States? In her book Law's Virtues: Fostering Autonomy and Solidarity in American Society, legal scholar and moral theologian Cathleen Kaveny argues that it can. In conversation with thinkers as diverse as Thomas Aquinas, Pope John Paul II, and Joseph Raz, she argues that the law rightly promotes the values of autonomy and solidarity. At the same time, she cautions that wise lawmakers will not enact mandates that are too far out of step with the lived moral values of the actual community.

At this lunchtime seminar, Professor Kaveny presented her book and discussed the relevance of her argument for American politics and society across a range of critical issues. 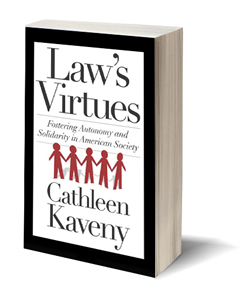