As part of celebrations at Georgetown marking the centenary of Sophia University in Tokyo, Senator Tom Daschle gave a keynote address on “Youth and Public Service for a Global Era.” The speech was part of a two day symposium exploring the challenges and opportunities for Japan-United States relations in the Asia-Pacific. Sophia University, founded in 1913, is Japan's first Jesuit university.
On the second day of the symposium, three panels examined the bilateral relationship and its regional significance from the perspectives of diplomacy, education, and technology. Ambassador Ichori Fujisaki and former deputy secretary of state James Steinberg led a closing podium discussion. In addition to promoting reflection on the future of the Asia-Pacific and Japan-United States cooperation, the symposium served as an opportunity for Georgetown and Sophia administrators, faculty, and students to discuss future areas for cooperation. 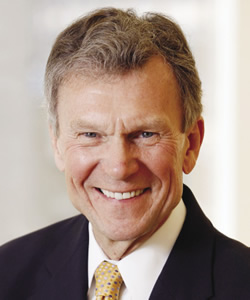 Thomas "Tom" Daschle is a Democratic policy advisor and politician who served as a US senator (D-SD) from 1986 to 2004, holding both minority and majority leader positions. He represented South Dakota in the US House from 1978 to 1986. He is now a distinguished senior fellow at the Center for American Progress and a senior policy advisor in Government Affairs at law firm DLA Piper; from 2005 to 2009 he was a special policy advisor at Alston & Bird LLP. Daschle is known for his expertise and advocacy on issues related to climate change, energy, health care, trade, financial services, and telecommunications. In 2007 he co-founded the Bipartisan Policy Center with George Mitchell, Bob Dole, and Howard Baker to promote cooperative approaches to public policy. He is the author of The US Senate: Fundamentals of American Government (2013) and Like No Other Time: The 107th Congress and the Two Years That Changed America Forever (2003).