The G20 Interfaith Forum builds on the vital roles that religious institutions and beliefs play in world affairs in order to present robust recommendations to the G20 and to the growing “network of networks” that the forum represents.

At its sixth annual event on “Peace, People, Planet: Pathways Forward,” participants discussed pressing global issues including children and refugees, action on climate, corruption, education quality, and health for all. Katherine Marshall, Berkley Center senior fellow and executive director of the World Faiths Development Dialogue, was a member of the 2019 Executive Organizing Committee.

At the 2019 G20 Interfaith Forum, held June 7 to 9 at the New Otani Makuhari Hotel in Tokyo, a Japanese audience of over 2,000 attended the sessions that were open to the public. Dr. Haruhisa Handa, a Japanese Shinto leader and philanthropist, and Worldwide Support for Development, which he chairs, were key supporters and organizers of the 2019 event. Japan will host this year’s G20 Summit, and consequently there has been considerable Japanese media attention on the forum.

The G20 Interfaith Forum has met annually in the host country of the G20 Summit since an inspired first meeting in Australia in 2014 directed towards the Australia G20 Summit, led by the Centre for Interfaith and Cultural Dialogue at Griffith University and the International Center for Law and Religion Studies (ICLRS) at Brigham Young University. ICLRS has since led a continuing effort, with events in Turkey, China, Germany, Argentina, and now Japan. Over the years the coalition of supporters and collaborating institutions has grown, and in 2019 the G20 Interfaith Forum Association was formed to provide leadership and continuity.

Marshall calls the forum “a special chance that forces religious actors to set their actions in a global perspective, to test their ideas against the best that emerge from other sectors, and to advocate courageously and creatively for action and change.”

Religious leaders, including Pope Francis and Ecumenical Patriarch Bartholomew I via messages to the forum, spoke to the care and concern of a diverse range of faith traditions. Speakers included Lord Carey of Clifton (103rd archbishop of Canterbury), Gunnar Stålsett (bishop emeritus of Oslo and honorary president of Religions for Peace), Sulak Sivaraksa (founder of the International Network of Engaged Buddhists), Nedžad Grabus (mufti of Slovenia and co-chair of the European Muslim Jewish Leadership Council), Elder Gerrit Gong (member of the Quorum of the Twelve Apostles, Church of Jesus Christ of Latter-day Saints), Bani Dugal (principal representative at the United Nations for the Baha’í International Community), and many other leaders, representing a broad spectrum of faiths.

All emphasized that politicians and faith actors can and must work together on issues where there is shared care for those left behind. KAICIID Secretary-General Faisal bin Muaammar summarized:

In our common road towards the Sustainable Development Goals and towards peace in particular, we need to continue creating spaces for dialogue and cooperation between the religious and policy-making sectors. This is an ongoing challenge, but one that we are overcoming.

A Moral Call to Action

At the launch of the forum Dr. Mustafa Ali, secretary general of the Global Network of Religions for Children, encouraged participants to provide a “prophetic voice” to warn of impending disasters that, if ignored today, will be even more costly in the future. He pointed to violence against children and changes in climate as two pressing examples of such disasters.

This call for a prophetic voice on priority challenges was met with strength as the G20 Interfaith Forum unfolded.

By its conclusion five areas emerged to shape the core recommendations of the 2019 forum:

An Untapped Wealth of Knowledge

Faith actors can offer the world a wealth of knowledge and resources in addressing the challenges of mounting inequality, urgent crises, and the need for more sustainable models of development. Running through much of the forum was a deep consciousness of the need to confront economic disparities and gender inequality, a focus that squarely aligns with Japan’s G20 priorities.

The economy will perform better if women are at the right place. Society will be much better when you use the knowledge, experience, and the heart of women to build bridges.

Other topics inspired by Japan’s G20 agenda included discussions of religion’s role in providing universal health coverage, and in caring for aging societies and innovating for the future. The refugee crisis, responding to disasters, religious literacy, and many additional topics were highlighted over the course of the forum’s rich program.

Forum discussions about children’s dignity and development included the active participation of young leaders. Intergenerational conversations took place on several panels, including one led by mentors and mentees of Sport at the Service of Humanity on “Youth Promoting Values for Peace.” A rousing speech by 18-year-old youth climate activist Kim Tran focused attention sharply on the impacts of climate change, calling for G20 countries to take note and take action.

Future of the Forum

Faith communities are both global in scale and deeply embedded in local communities, providing constant witness for the most vulnerable and those left behind. The G20 Interfaith Forum will remain actively engaged in drawing on this wisdom both to respond to global agendas and to help shape them. The forum particularly draws on and brings together the work of diverse networks linking organizations whose focus is the Sustainable Development Goals. Ishmael Noko, former secretary general of the Lutheran World Federation and founder and president of Interfaith Action for Peace, remarked,

I came here and I sensed that there is a new community on the march.

The G20 host each year plays a central role in defining the G20 agenda. This offers an opportunity to learn and contribute to differing approaches and priorities but also to maintain a focus on leading moral and practical issues. The immediate challenge for Interfaith Forum participants is to advance the excellent proposals that emerged in preparing and conducting the Tokyo agenda while also looking to G20 agendas for 2020 (hosted by Saudi Arabia), 2021 (hosted by Italy), and beyond.

“The issues facing the G20 are urgent and complex,” observed Marshall.

They demand both commitment of global leaders and a far more robust set of partnerships, including with religious actors. The challenges cannot be addressed without thoughtful attention to a moral compass. The forum's deep unease with words alone is the core driver of its call to urgent action.

Read Katherine Marshall's reflections on the 2019 G20 Interfaith Forum and why it's important on the Berkley Forum. 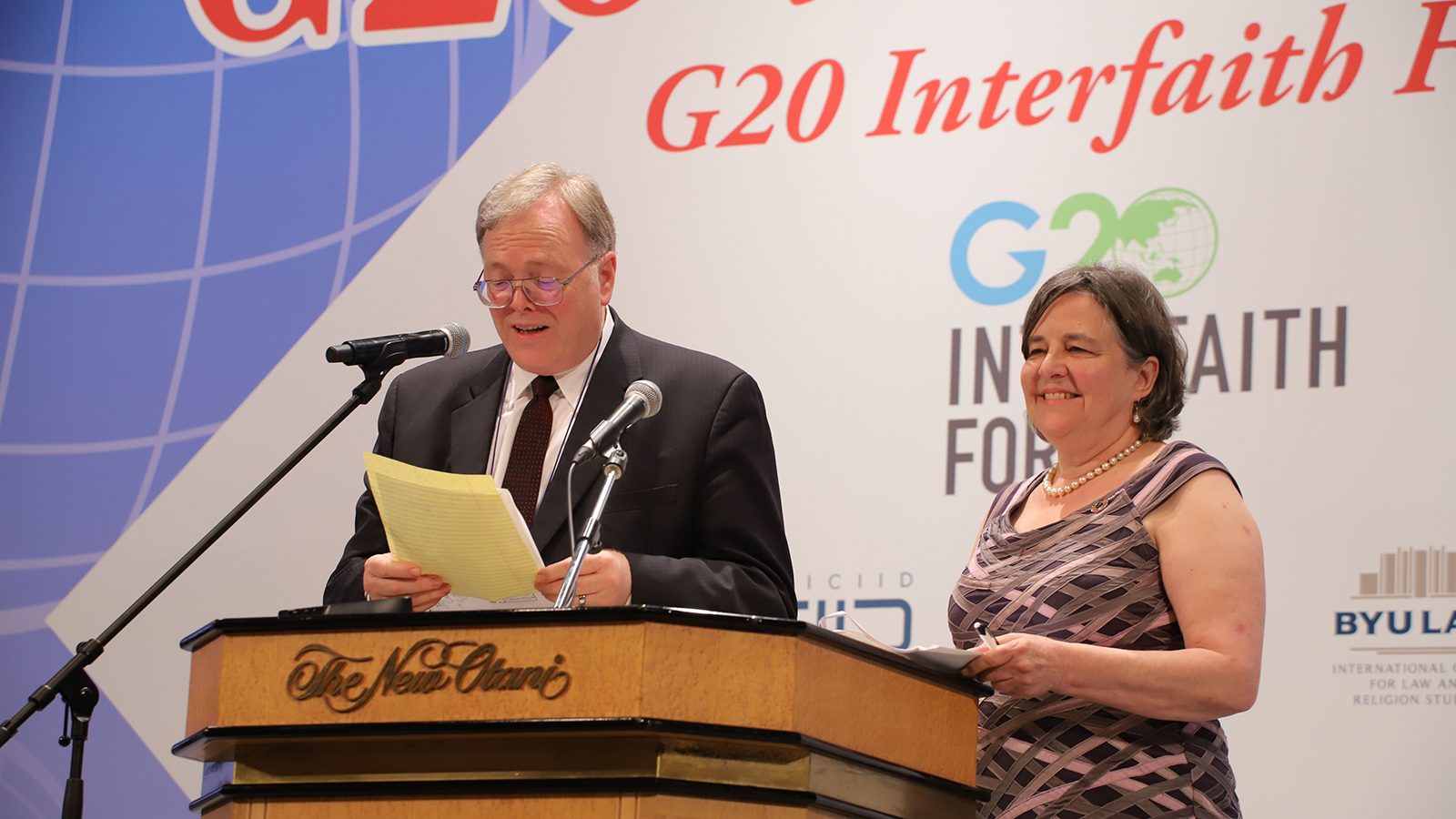 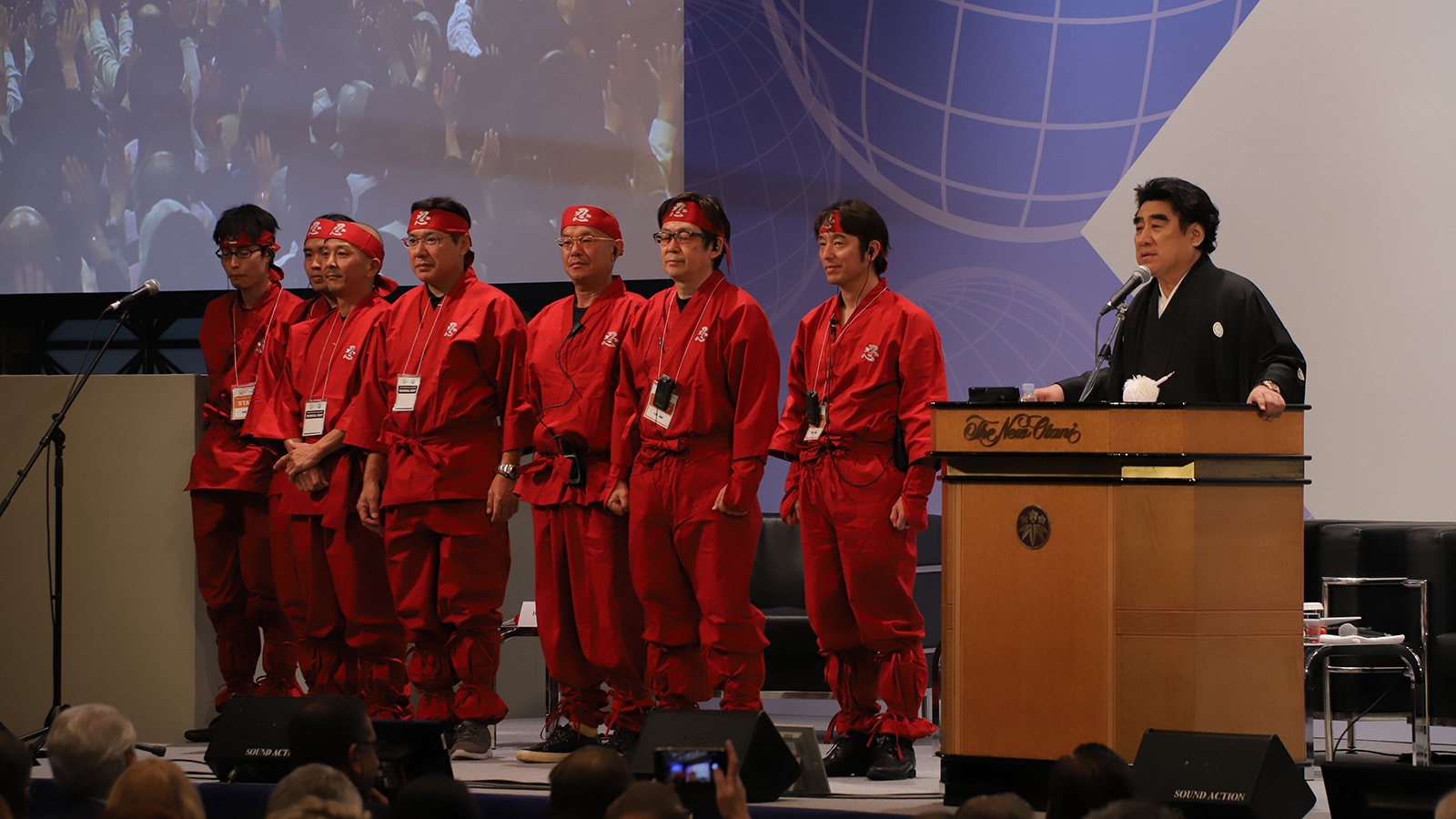 Dr. Haruhisa Handa, chairman of Worldwide Support for Development and patron of the G20 Interfaith Forum. 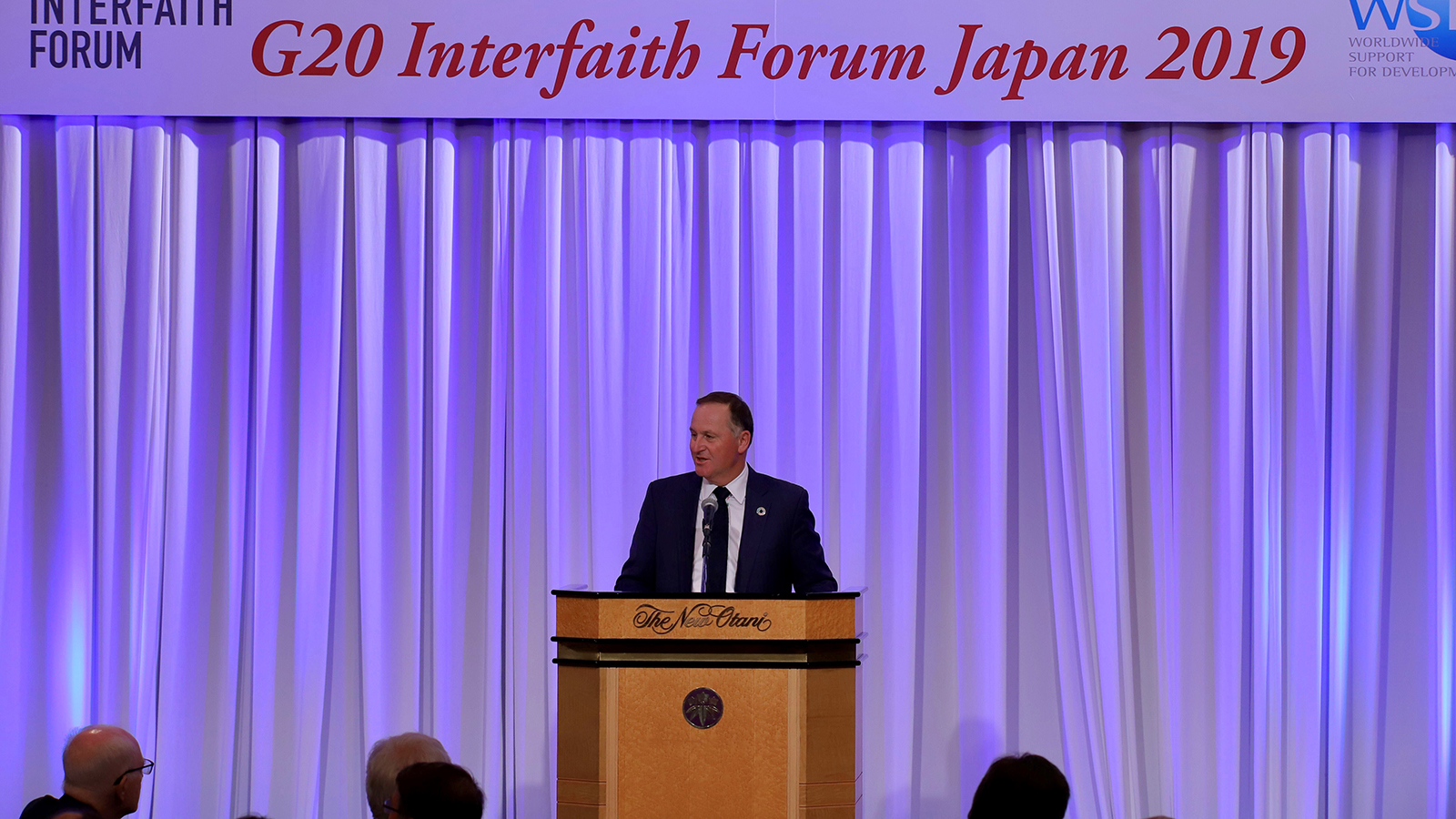 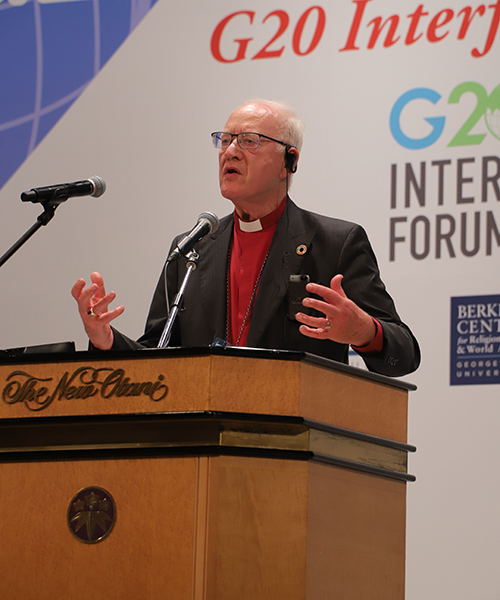 Lord Carey of Clifton, 103rd Archbishop of Canterbury, was one of many faith leaders from diverse traditions. 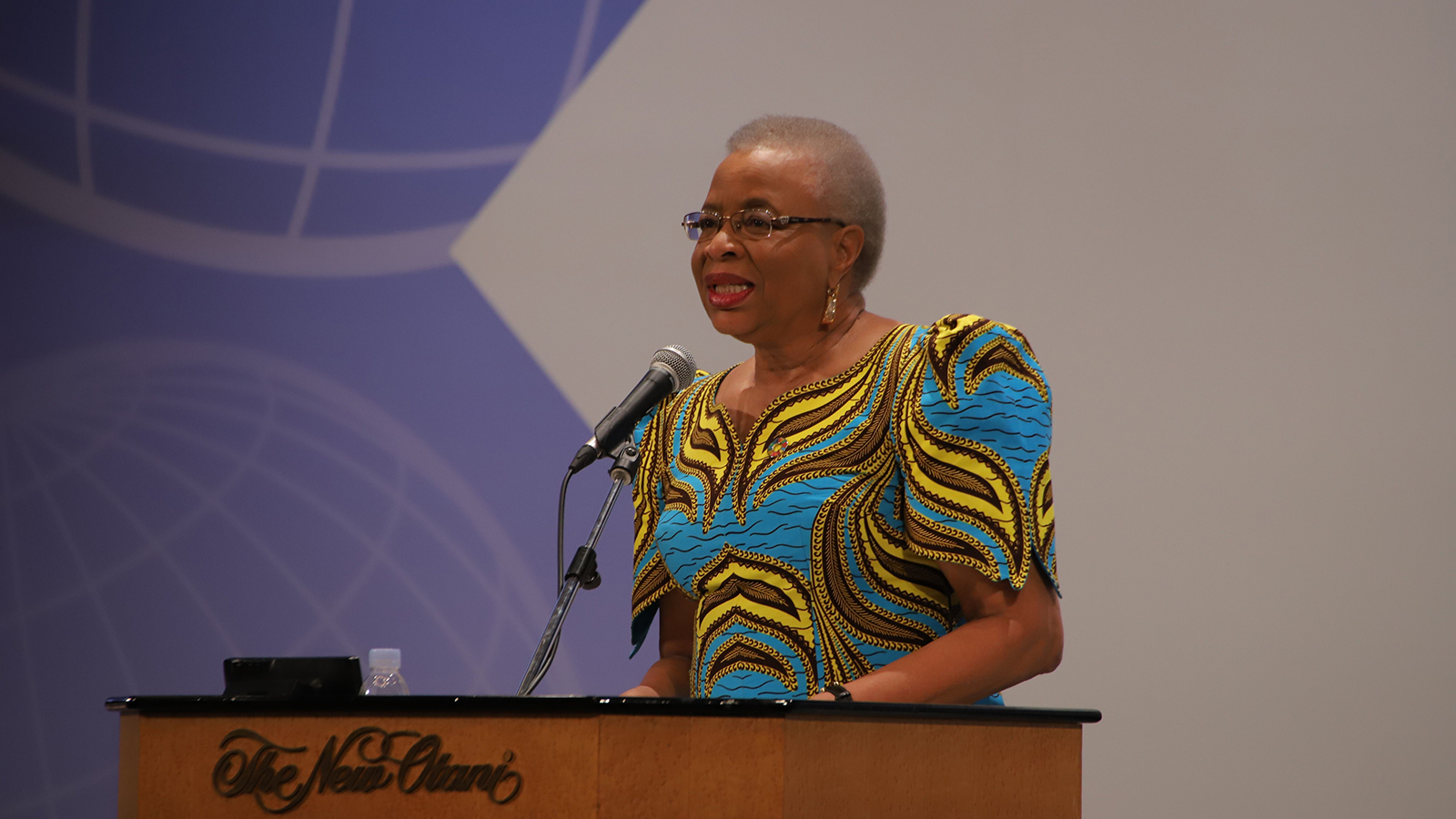 Graça Machel, an international advocate for women and children, spoke powerfully about caring for refugee children. 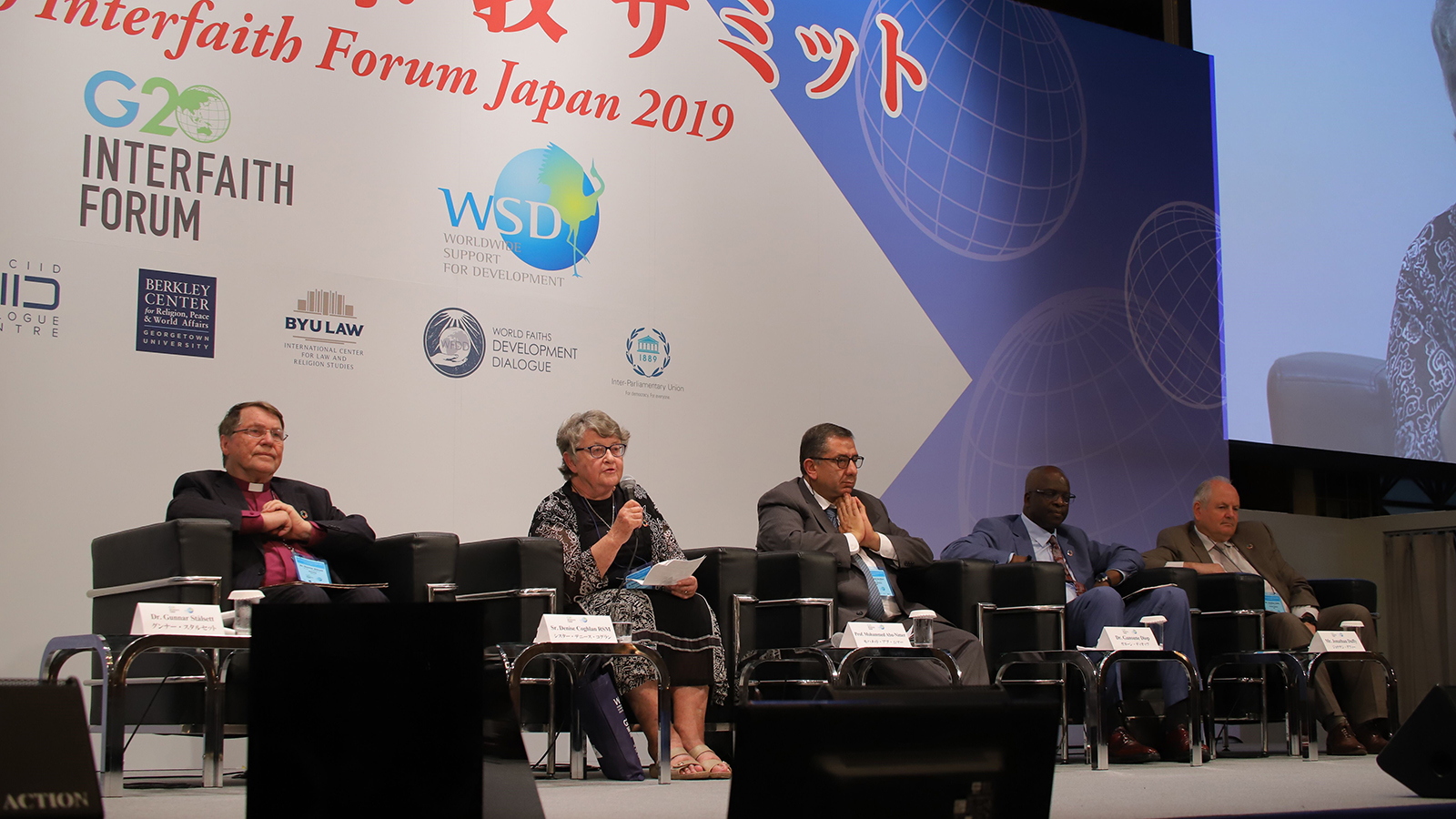 A panel on “Action Agendas” 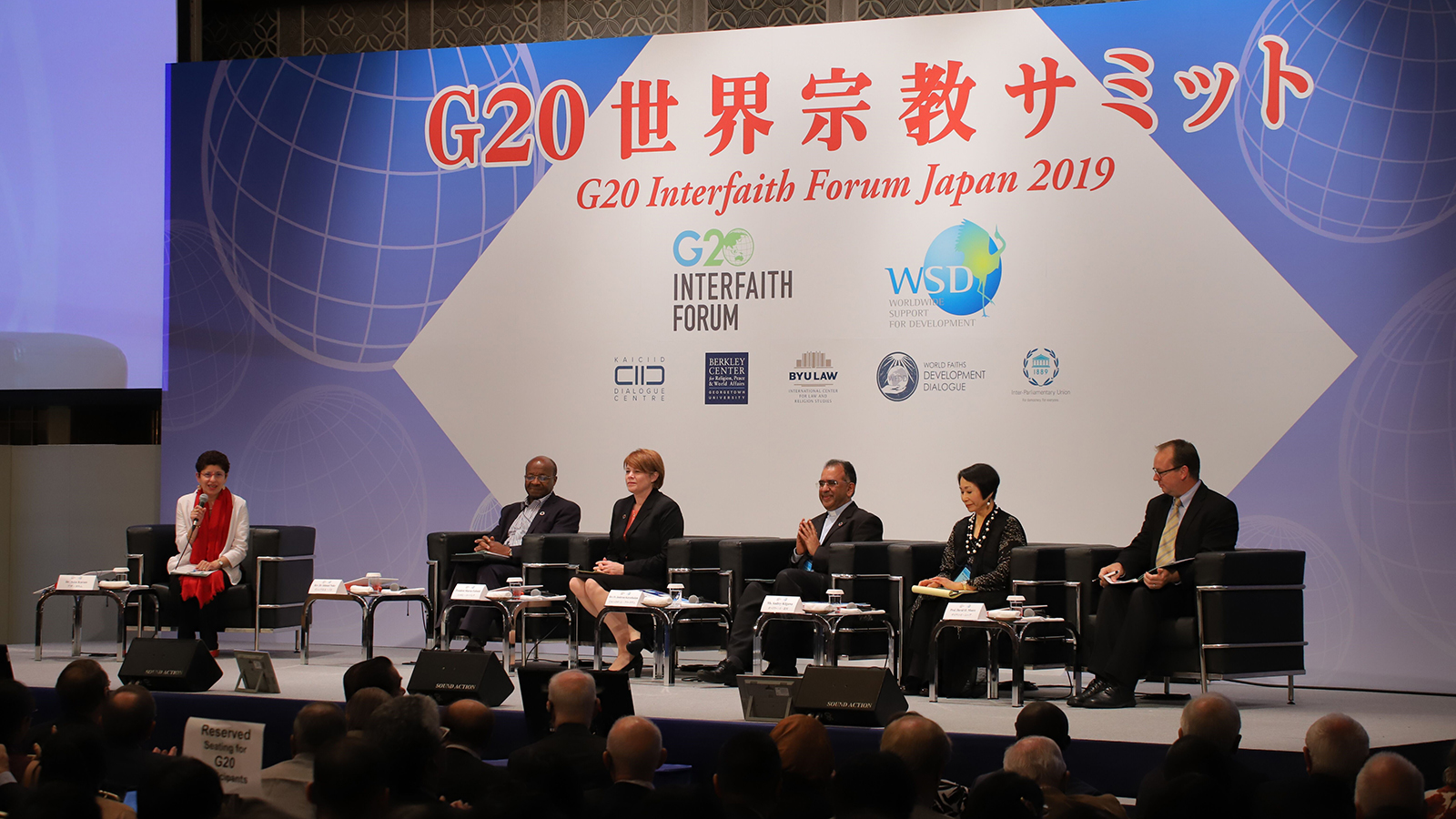 Participants in a panel on taking “Ideas to Action” 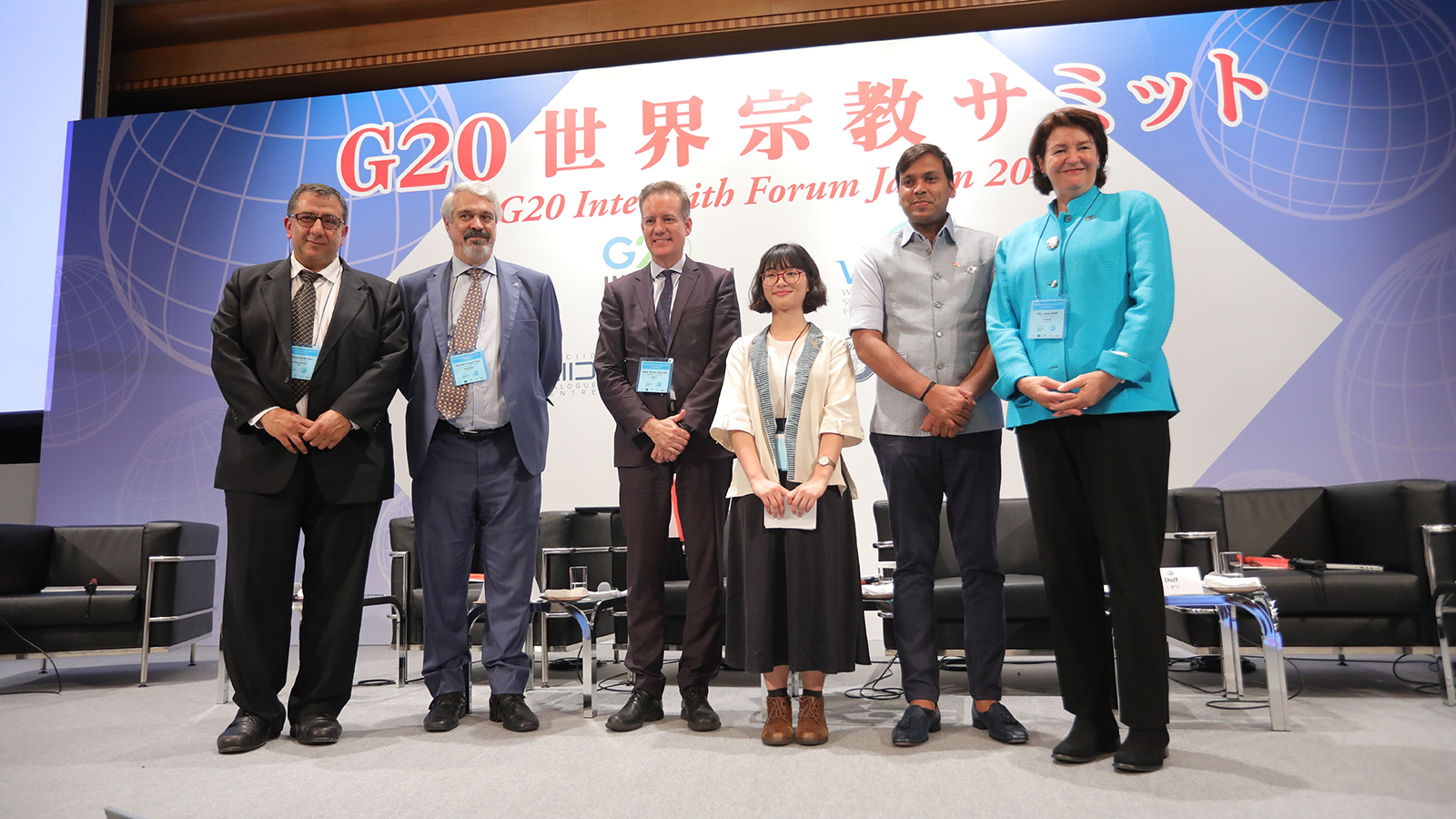 A panel looking “Towards 2020” and beyond 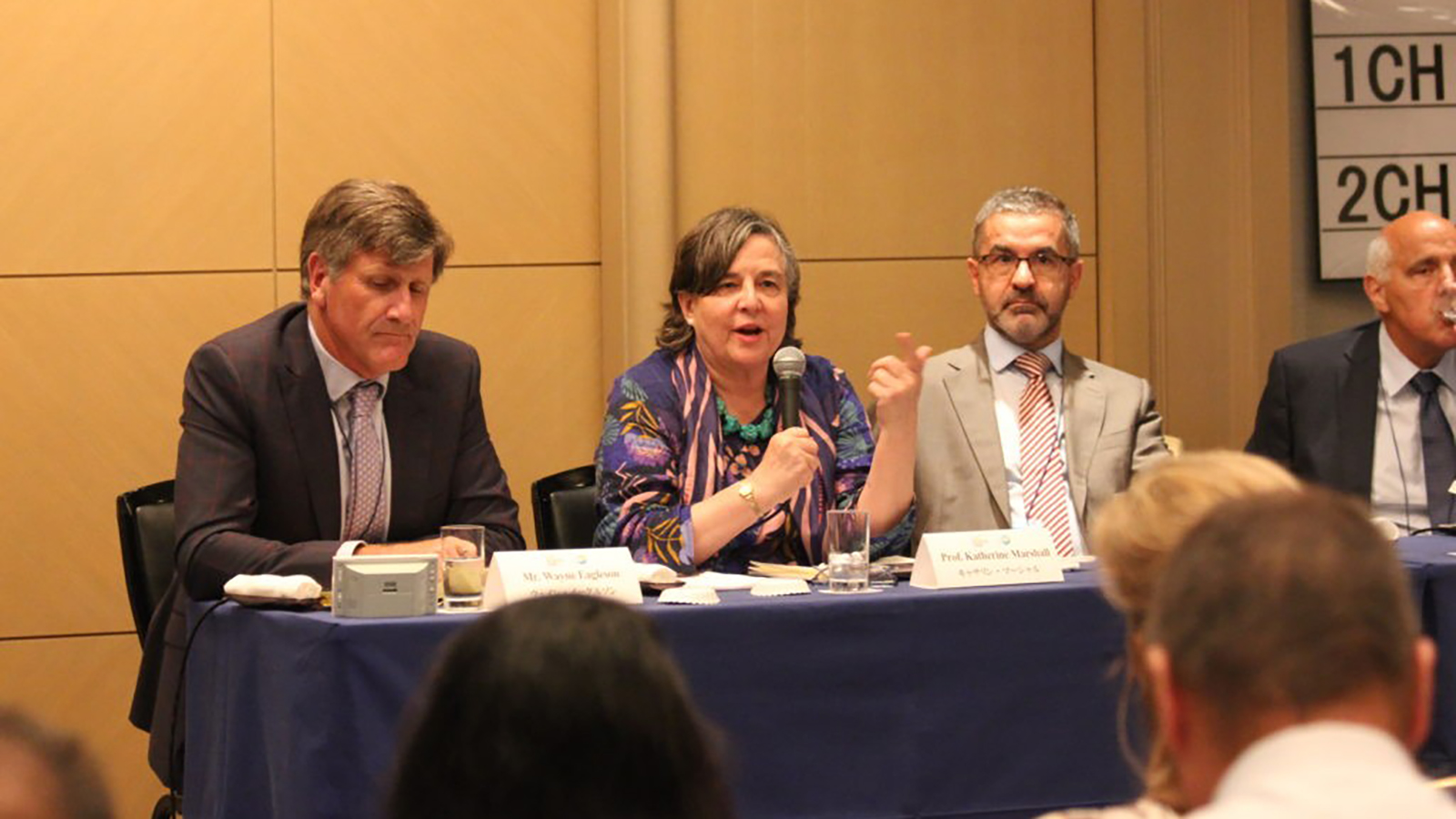 At one of 22 working sessions Katherine Marshall speaks on combating corruption.