Faith as a Force for Peace in Nigeria

Many Nigerians are still wondering today what the future has in store for our beloved nation. For some decades now, Nigeria has witnessed conflict, tension, and violence. These crises, which often manifest themselves in different standards and degrees, are largely politically motivated under the guise or pretext of religion or ethnicity.


Extremist groups, such as Boko Haram, perpetuate ethno-religious conflict, committing acts of terror and kidnapping. The greatest problem we have today in Nigeria is that most of these atrocities have been perpetuated in the name of religion. This in turn has negatively affected the good relationship between Christians and Muslims in Nigeria, which took our ancestors generations to build. What is left is a gulf of fear, suspicion, and distrust between the major religions in the country today. Similar to Nigeria, other countries have also experienced the evils of terrorism. Take for example the Middle East, parts of Asia, and Africa where this kind of problem is even more pronounced and severe, making ISIS, al-Shabab, Al-Qaeda, and Boko Haram household names.

Our greatest shock in all of these developments is that the Nigerian government seems to have been overcome by terrorism, especially with the kidnapping of 250 schoolgirls in Chibok. The inability of our security agents to bring back our girls for over a year is a clear sign of weakness and irresponsibility on the part of the government.

Yet even in these discouraging circumstances, we still take solace in the words and actions of some of Nigeria’s exemplary leaders, like His Eminence, John Cardinal Onaiyekan, who said, “Christians in Nigeria are not at war with our Muslim brethren. It’s not as if Muslims in Nigeria have declared war against we Christians, so, let us be careful not to allow the evil activities of Boko Haram to dictate and shape the way we relate with each other.”

This is not easy to digest for many of us in Nigeria, especially given recent events. However, we still hope to see light at the end of the tunnel, particularly with the elected government of President Muhammad Buhari. We are very optimistic that with his military expertise there can be an end or at least a reduction of insurgency in Nigeria. Although experience has shown that past leadership never lives up to expectations, our hope is that the story will be different this time.

Before President Buhari was elected, the Sultan of Sokoto, His Eminence, Alhaji Sa'adu Abubakar, made a comment that still echoes in my ear. He advised Nigerians not to allow politicians to manipulate them by peddling hate for their vested interest. The sultan appealed to Nigerians to be guided by common values and work together to actualize values in the wider society. This means that we still have and need sincere and God-fearing leaders who cannot afford to watch the lives of Nigerian citizens and their properties be callously wasted in the name of politics, religion, or even corruption.

The words of these two great leaders have continued to inspire many Nigerians, especially women like me, into more concrete actions against terrorism and injustice in the society. Take for instance the “Bring Back our Girls” campaign, and many other women-based initiatives – these groups strive day and night to make the world a better, peaceful, and more just place for all of us to live. My years of peacebuilding work with Christian and Muslim women in Nigeria has helped me to understand that as women and sisters in faith, we can gradually and steadily make peace possible by teaching members of our families and communities how to confront violence in a non-violent way.

So, as a woman of faith, I believe it is not enough to complain and blame for our misfortunes; we have to do something to stop violence and injustice in our society because we have great potential for that. If this is the case, then one can rightly say that to reconstruct a new Nigeria, we (the elders, leaders, and statesmen, including women) in Nigeria should critically examine the environment that produced extremists and corrupt leaders.

This is why I believe in the conviction of His Eminence John Cardinal Onaiyekan when he said that he is passionate about dialogue with Muslims, because many of them are also genuinely concerned and worried about religious extremism and violence in the world today. He added that violent extremism is a result of silent extremism that does not carry guns. This is manifested in what parents tell their children about other religions in the homes, and what the religious teachers and preachers tell children in schools and religious houses. Cardinal Onaiyekan said that another way religious extremism is encouraged is when people demonize other religions and canonize their own religions.

Thus, for a new Nigeria to emerge successfully, I believe there should be a renewed way of handling issues of corruption, bad governance, terrorism, and religious extremism, and this must be done in a very sincere and honest manner. We have to carefully review and redefine our value system, norms, beliefs, objectives, and goals once again. Some key and exemplary religious leaders in Nigeria like His Eminence John Cardinal Onaiyekan and His Eminence Alhaji Sa'adu Abubakar should be fully involved in this re-orientation exercise. According to Rev. Fr. Cornelius Omonokuah, this is urgent because the ideology of the terrorist is giving a bad name to all of us in Nigeria.

The dream of every Nigerian is retrospection—inquiring where terrorism emanated from. This indeed will help us to focus on a new action plan, where the guns in the battle with Boko Harm are silent.

To learn more about Sister Agatha, read a 2012 interview with her conducted by Katherine Marshall. 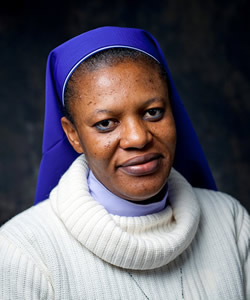 Sister Agatha Ogochukwu Chikelue, D.M.M.M., is director of the Liaison Office at the Catholic Archdiocese of Abuja and the co-chair of the Women of Faith Peacebuilding Network. As a member of the Congregation of Daughters of Mary Mother of Mercy, her life and work have exposed her to different cultures and experiences, especially on conflict, peace, and reconciliation. She is the co-founder of Women of Faith Network, Abuja, Nigeria, and Abuja Interfaith Youth Forum Nigeria and founding member of Christian/Muslim Women Dialogue Forum in Nigeria. She has also served as secretary of the Interreligious Dialogue Commission of the Catholic Archdiocese of Abuja, secretary of the Abuja Interfaith Peacebuilding Forum Nigeria, and a graduate fellow of PPMA Netherlands. She holds a master’s degree in International Affairs and Diplomacy from Imo State University, Nigeria, and B.Sc. in Public Administration from the University of Abuja. Chikelue has a certificate in Mainstreaming Religious Values into Education for Sustainable Development, Kenya.
comments powered by Disqus