In Panama City, Florida, amidst the conservative Muslim community in which I grew up, the signing of a marriage contract (kitab/nikah) was a momentous event, one full of bubbling and nervous excitement. For my friends and I, who grew up wearing the hijab (Muslim head-covering), the marriage contract signaled the first time a husband-to-be would see his wife’s hair and body and also, the first time the couple could touch each other, let alone be intimate.

As a young girl, watching my older friends get married, I thought of the details that occurred during the marriage contract ceremony as unimportant formalities. It wasn’t until years later—armed with an M.A. in Arab Studies and a Ph.D. in Islamic Studies— that I would come to appreciate the legal components of a Muslim marriage contract, which reflect a rich tradition of empowering women and encouraging female agency.

In line with the cultural traditions of the Levant (northern region of the Arab world), the marriage contract would be celebrated by an all-female party, during which the groom walks in to see his bride without her headscarf or full body covering for the first time. Enthusiastically anticipating this moment, a few women are assigned to guarding the door and letting the rest know when the groom has arrived. When the groom walks in, the women let out a loud, cheerful applause or ululation and intently study his reaction upon first seeing his wife without a headscarf. A husband of a close friend once confided to me that he didn’t recognize his wife at first! The groom’s entry into this all-female reception is the high point of the night and becomes the memory of a lifetime.

In the midst of the wedding excitement, it’s easy to overlook the deeper religious context, but for women, these details deeply matter. What I now know as an Islamic scholar is that in our tradition’s family law, a woman is viewed as an autonomous being and her consent is necessary for the contract’s validity. Jurists agree that a forced marriage nullifies the contract’s validity and a woman has full agency to terminate the contract if it is contracted against her will. Even though there remains a troubling gap between this law and how the faith is practiced among some in the faith, the legal rulings and conditions for a valid Muslim marriage highlight the autonomy and rights of women.

While the marriage contract may appear to be just a formality to many Muslims on the day of their marriage, its legal stipulations can be empowering to women. A women’s entry into a “union” with her husband does not negate her autonomy, theoretically or legally. A woman keeps her own family name and identity. Any assets she brings into the marriage (whether through earnings, investments, inheritance, etc.) remain independently her own. Her husband has no legal rights over his wife’s wealth and property and yet, is legally obliged to spend on her basic necessities, such as housing, food, and clothing, out of his personal wealth.

Often confused by many as a bridal dowry (i.e. in exchange for a bride), the matrimonial gift (mahr) is an essential requirement of the Muslim marriage contract. The mahr is a gift the husband owes his wife-to-be as a condition of the marriage contract; the nature and amount of the gift should be agreed upon by both partners. The stipulation of the mahr in the marriage contract is based on verse 4:4 of the Qur'an, among others, which instructs men to “give the women (on marriage) their dower as a free gift.” According to Islamic law, the bride possesses the exclusive right to this marital gift. This requirement makes the woman a party to the contract, rather than the object of transaction.

It's not fair to interpret the mahr as an act that "purchases a wife." Historically, the mahr has been a substantial amount specified in cash or property, and served to grant women a level of financial security in the marriage. As historians such as Judith Tucker demonstrate, by establishing a woman’s exclusive right to the mahr, jurists and muftis “endorsed the idea that a woman should enter marriage as an empowered individual” (In the House of the Law, 57). Although the full amount of mahr is due once the marriage is contracted, many Muslims began to divide the mahr into advanced and deferred portions, due to its substantial amount, as early as the eighth century. According to historian Yossef Rapoport, this practice became quite common in later periods and bolstered a woman’s standing in a marriage by protecting her against arbitrary divorce (which would render the full mahr due at once). Rapoport demonstrates how the common historical practice of dividing the mahr into advanced and deferred portions also put a wife in a better position to enforce stipulations she made in her marriage contract (Marriage, Money and Divorce in Medieval Islamic Society, 58). Since the wife is entitled to request the deferred mahr at any time (unless its due date was specified in the contract), women used the deferred portions of their dowers to hold their husbands accountable to promises they made at the time of marriage, according to Rapoport’s extensive research on Islamic marriage contracts (“Matrimonial Gifts in Early Islamic Egypt”).

The practice of dividing the mahr into advanced and deferred portions is widespread throughout the Muslim world today. All of the Muslim marriage contracts I have witnessed growing up, including my own and those of my friends, cousins and three sisters, had divided the mahr this way. This practice, however, no longer carries the same level of deterrence as it did in the past due to the disintegration of the Islamic legal system and the reluctance of many women to legally demand their rights in court. In the West, where Islamic law is not enforceable, whether or not a woman ever gets the deferred portion of her mahr too often rests upon on the extent of her husband’s moral consciousness.

Despite a woman’s rights to consent to a marriage and to receive a matrimonial gift in Islamic law, the enforceability of these conditions today often depend on a family’s cultural norms, level of education, and commitment to Islam. Among the Muslim families and friends I have known, both in the United States and in the Muslim world, these conditions have been strictly enforced. Yet it is not surprising to see these rights fall to the wayside in places where cultural norms prevail—such as tribal communities. For Muslim women, the way to preserve and cultivate the spirit of female agency and financial autonomy in Muslim marriage contracts is through greater literacy in their religious tradition and advocacy of their rights. 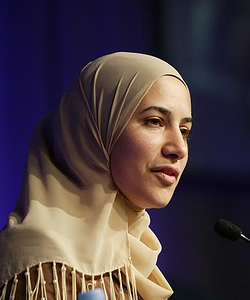 Hadia Mubarak is an assistant professor of religious studies at Guilford College. Previously, Mubarak taught at the University of North Carolina at Charlotte and Davidson College. Mubarak completed her Ph.D. in Islamic studies from Georgetown University, where she specialized in modern and classical Qurʾanic exegesis, Islamic feminism, and gender reform in the modern Muslim world.