Sitayanam: A Woman’s Journey of Strength

The Hindu culture is shaped by the countless stories in our mythologies. These stories illustrate human existence and emphasize good overcoming ignorance (evil). The deities are sacred characters who personify values and bring difficult concepts to life.


Like many others in my generation, growing up, I pretty much ignored the Hindu gods and goddesses and deities. I did not see their relevance in contemporary life. Yet, unconsciously, they were so much a part of me. When I became an immigrant mother I realized I needed a cultural connection with my daughter. I also realized as a minority it was important for her to know her heritage and be proud of it. My search for Truth and my identity as an Indian woman led me to the Vedas, then the Puranas and now seva[1] (seva [a Sanskrit word for service] is community social responsibility). I came to see these stories through their historical context as important steps in the various stages of human development.

I believe by taking a new look at the stories and characters as adults, from a contemporary perspective, we can connect with our inner archetypes and better understand how our Hindu tradition deals with life and its changes, so beautifully. When I got divorced, at a relatively young age, I struggled to find acceptance within the Hindu psyche in me. Then I discovered Sita (the main female character in the epic Ramayan[2], a sacred Hindu text) and looked at her with a new lens. And I found my archetype—a single woman who raised well balanced children. In order to discover that reality I had to peel back layers of misperception.

I see that Sita, more than any other character, is an integral part of the Indian woman's psyche. At every stage of an Indian woman's life, her name is invoked. I find it amazing that one great epic written by a poet thousands of years ago has shaped and continues to shape and reshape the thinking of an entire culture. I’m further fascinated by how certain aspects of a character have been emphasized more than others to suit the political and societal norms of the day. They have been understood or misunderstood to manage relationships through control and power. Most have focused on the negative interpretations rather than the positive.

The constant negative depiction of Sita in Bollywood movies, such as Lajja[3], negates the positive, empowering archetype of Sita, so integral to a Hindu psyche. The constant negative messaging makes her acceptance difficult for the educated, urban Sitas of tomorrow. I believe we have to understand the deities as the flesh and blood characters that the poet, Valmiki, was attempting to bring to life in his great poem.

To briefly tell the story of Sita[4]: Princess Sita married Ram, the prince of a great kingdom, Ayodhya, after he proved his valor. She accompanied him to the forest when he was banished for 14 years. There Ravan[5], the king of Lanka, abducted her and wanted to marry her. She refused and was kept a prisoner until Ram rescued her. However, Ram asked her to undergo a test to prove her innocence which she did. The festival of Diwali is celebrated all over the world to welcome their return and rejoice the good overcoming evil (ignorance). Later, to keep a democratic balance, Ram had her taken to a hermitage. There she raised their children to be future kings.

For many Hindus, the name Sita conjures up an image of a chaste woman, the 'Ideal Woman.' The chaste ideal becomes negative, especially in the Bollywood portrayal, when she is shown as victimized and oppressed. She obeyed her husband's commands, followed him, remained faithful to him, served her in-laws or yielded to parental authority, had to prove her innocence, raised her children alone, and generally did her duty whether she wanted to or not.

Yet, there are others, like me, who see a more liberated Sita, the cherished wife of Ram, who lived a complicated, honorable life that many a modern woman could relate to. She was outspoken, had the freedom to express herself, asserted herself whenever she wanted to get her way, fell for the temptation of the golden deer, spoke harsh words, repented it, loved her husband, was faithful to him, served her family, did not get seduced by the glamour and material objects in her abductor's palace, faced an angry and suspicious husband, tried to appease him, reconciled her marriage, later accepted her separation, raised well-balanced children as a single mother, and then moved on.

To me Sita revealed her greatness wherever she was placed. This is not a greatness free from human weakness and upset, full of divine protective forces. On the contrary, the great characters reveal their strength in the form of truth, sincerity, self-sacrifice, and other virtues. Sita’s greatness stands out for her ability to remain true to her principles in spite of terrors and temptations, perhaps more than any other character in the Ramayan, except possibly Ram. But it is not that Sita did not cry or complain. She was a real woman, not a stone or a wall with no outside expression of her inner workings. Hers was the special capacity, amidst the wailing and complaints, to use her discrimination and to face her challenges in a dignified manner[6].

In the Ramayan, in the case of almost every great woman character, the initial stroke of calamity from outside or the surging up of greed from within did produce desperation. But eventually, every woman regained her balance, very slowly in some cases, but steadily until at last she transformed and reached the highest levels of consciousness that mankind or womankind could ever manifest under similar circumstances, through forgiveness, peace, fortitude, and wisdom.

In our society today, separation, divorce, and single parenthood are increasing realities. The Ramayan, written thousands of years ago, dealt with those issues. Sita was a single mother, unofficially divorced. Though unhappy with the separation from her husband, she taught her children to respect their father. She did not teach them hate and vengeance. No one could say her children came from broken homes or that they were affected by that fact in any way. Ram did not attempt to have their custody so he could bring them up in a manner befitting their social obligations. He knew that in the hermitage Sita would ensure they were raised to be future kings. In our society, we see men and women fighting with each other and using their children as weapons. Sita and Ram’s story holds a lesson for modern society of a better path.

I feel Sita did not see herself as a victim. If she had, she would have gone back to face Ram and demanded her equal rights, as perhaps Draupadi[7] (the main female character in another Hindu epic, the Mahabharata[8]) would have done. Sita was not a docile character, though she was an unhappy person. For her, it was the loss of a husband who had loved and cherished her once. She understood the struggle between the king and her husband and rose above the situation. Once her children were accepted by the people and by their father, Ram, as the future heirs, she did not have to prove herself publicly. So she ended her story. Her role as a mother and a wife was completed.

The Ramayan to me is a story of the struggle to overcome difficulties and the tough choices the characters made in keeping with dharma, the socially accepted ideals of that time. And I believe by emphasizing the qualities of strength and courage in the stories, we can change the contemporary societal perspective of Hindu women who are seeking strong role models, as these characters serve as an inner moral compass. Social justice will then be an explicit part of the Diwali celebration around the world. 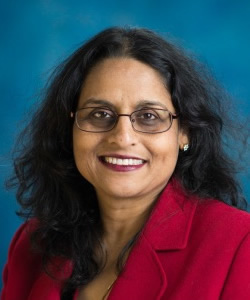 Anju Bhargava is a risk and strategic business transformation management consultant. The only Hindu American appointed to President Barack Obama’s Inaugural Advisory Council on Faith Based and Neighborhood Partnerships and the Department of Homeland Security Advisory Council, she is the founder of Hindu American Seva Communities.